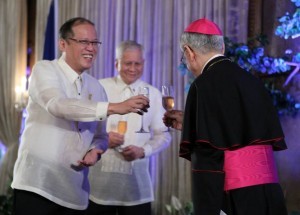 President Benigno S. Aquino III, accompanied by the Papal Nuncio to the Philippines and Dean of the Diplomatic Corps His Excellency Archbishop Guiseppe Pinto and Foreign Affairs Secretary Albert del Rosario, leads the traditional toast for the New Year’s Vin d’ Honneur at the Rizal Hall of the Malacañan Palace on Friday (January 11, 2014). The annual reception which marks the 27th Vin d’ Honneur since the 1986 EDSA Revolution was attended by government officials, members of the Diplomatic Corps, officials of international organizations and businessmen. (MNS photo)

MANILA (Mabuhay) – “Judge not lest you be judged.”

This was the message of President Benigno Aquino III to Novaliches Bishop Emeritus Teodoro Bacani, who asked his Budget Secretary Florencio Abad to resign from his post amid allegations of involvement in the multibillion-peso pork barrel scam.

Earlier, Bacani called on Abad to resign while the investigation on the pork barrel fund scam was ongoing.

Aquino, however, said an accusation is not proof.

“Lahat tayo under our laws may presumption of innocence at maglabas ng pruweba,” he said, adding Abad has already proven Napoles’ allegation was untrue. (MNS)

Inflation remains stable in May 2013