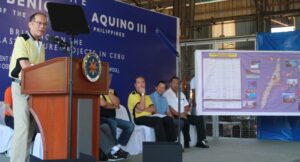 President Benigno S. Aquino III delivers his speech during the project briefing on the major infrastructure projects in the Province of Cebu at the Equipment Management Division of the Department of Public Works and Highways (DPWH) Region VII in Sergio Osmena Boulevard corner V. Sotto, Cebu City on Monday (August 24, 2015). (MNS Photo)

Senator Francis “Chiz” Escudero, a close ally of Aquino, said the president should consider either certifying as urgent one of the pending bills in Congress or sending his own proposal for the consideration of lawmakers.

“The reality is that the input of the President is critical when it comes to tax measures,” Escudero said. “The lawmaking process stops at his desk. If he doesn’t like a bill, he won’t sign it.”

The senator said that the present 32-percent tax rate is one of the highest in the region.

Escudero, former chairman of the Senate committee on finance, added that a “presidential certification will make the bill a priority measure and veto-proof.”

“More than the specifics of the bill, what is important is the President’s message to Congress that ‘I want this measure passed,’” he said.

Escudero is one off the authors of Senate Bill 716 amending the National Internal Revenue Code to adjust the levels of net taxable income and nominal tax rates.

He said tax rates should be adjusted to reflect the erosion in purchasing power caused by inflation.

The proposal is pending before the Senate committee on ways and means under Senator Sonny Angara.

How you can tell the difference between allergy and a cold

Senators want Budget Department to clarify policy on use of savings