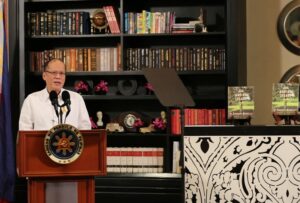 President Benigno S. Aquino III delivers his message during the book launching of “The Aquino Legacy: An Enduring Narrative” at the Writers’ Bar of the Raffles Hotel in One Raffles Drive, Makati Avenue, Makati City on Thursday. (MNS photo)

MANILA, Nov 30 (Mabuhay) – President Benigno Aquino III on Monday urged Filipinos to emulate the courage shown by Andres Bonifacio and do their own share in helping the country progress.

In a statement released on Bonifacio’s 152nd birth anniversary, Aquino paid tribute to the hero’s “boldness in defending our motherland” and “his determination to edify himself in the ways of his time.”

Though more than a century has passed since Bonifacio led the revolution against Spain for Philippine independence, the President said the late revolutionary remains to be a source of inspiration for Filipinos.

“As we are reintroduced to this everyman who helped bequeath to us a future of freedom and dignity, may we also find in ourselves the courage to bolster our people’s progress and contribute to realizing a more equitable and harmonious tomorrow,” he said.

Aquino said events in recent history have shown that transformation can happen and corruption can be overcome when people are united.

“May our solidarity endure as we journey further along the Daang Matuwid, maximize the possibilities of our resurgence, sustain our Republic’s reform, and continue our pursuit of justice,” he said.

The President also expressed hope that the commemoration of Bonifacio Day would rouse the country as “we set forth grander aspirations.”

Aquino is currently in Paris, France for the 21st Conference of Parties (COP21) where several countries are expected to forge a legally binding agreement that will pave the way for policies that will address global warming.

A total of 150 world leaders will take part in the historic conference. (MNS)