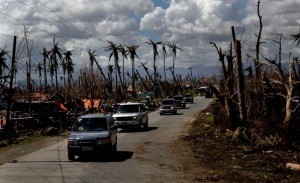 President Benigno S. Aquino III, together with some of his cabinet secretaries on Monday (November 18) in a convoy of vehicles goes around places where victims of super typhoon Yolanda strike. The President has been going around Leyte and Samar to inspect and give support to the victims. (MNS photo)

“Regions most severely affected by the typhoon account for one-third of the total rice production in the country,” the UN Food and Agriculture Organization said in a statement.

“Hundreds of thousands of farmers in the Philippines whose crops were destroyed by Typhoon Haiyan need urgent assistance to sow new seeds before the end of the current planting season,” it said.

The main-season harvest of the staple grain was well under way in the central Philippines when the typhoon hit, also “badly disrupting” ongoing planting for the secondary season, the FAO said.

The Rome-based agency added: “There is concern that many storage facilities may have been destroyed, along with their contents.”

Dominique Burgeon, head of FAO’s Emergency and Rehabilitation Division, said in the statement: “If we want to avoid entire regions of the country having to rely on food aid, we need to act now to help vulnerable families to plant or replant by late December.”

The agency plans to supply seeds for rice and maize as well as tools, fertilizer and irrigation equipment, it said.

“Families will also receive vegetable seeds to help bridge the gap before the next harvest,” it added.

Some 13 million people were affected by Haiyan, one of the most powerful typhoons ever recorded, which struck the Philippine archipelago on November 8, claiming at least 4,000 lives.

Four million people were displaced, according to the UN humanitarian agency OCHA.

An estimated 2.5 million are in need of food aid.

COVID-19 VAX NOT FOR PROFIT-MAKING — NTF