PHOENIX, February 11, 2011 (AFP) – Arizona is counter-suing the U.S. government, charging that Washington has failed to protect it from an invasion of illegal immigrants and related violent crime, its governor said Thursday.

The lawsuit, which seeks federal compensation, is in response to a federal lawsuit filed by President Barack Obama’s administration last year challenging Arizona’s enforcement of a new immigration law along the U.S.-Mexican border. 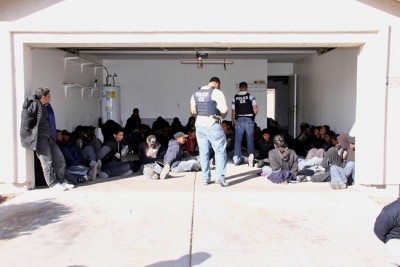 “Our citizens have lived with this dark cloud for too longâ€¦It’s time for the federal government to do its job and secure the border,” said Governor Jan Brewer, announcing the lawsuit outside the federal courthouse in Phoenix.

The lawsuit notably charges that the U.S. federal government has failed to reimburse Arizona for more than $760 million in costs for incarcerating illegal immigrants.

Brewer said the boundary between Arizona and Mexico remains a dangerous place despite stepped-up enforcement along the nearly three thousand mile border by federal authorities.

She also cited the recent death of a U.S. Border Patrol officer as evidence of illegal incursions across the border by criminal drug cartels. “Our border and immigration system are still broken,” she said.

The lawsuit also seeks compensation from the federal government for the cost to the state of securing the border.

Brewer claimed fighting illegal immigration had cost the state more than a billion dollars, funds the state simply does not have while facing a serious budget crisis.

She noted that the legal action is being paid for with private funds and is not costing taxpayers. Horne said he expects the lawsuit to be settled in the U.S. Supreme Court.

But other state officials challenged Brewer over the merits of another legal fight with the government.

“Filing a lawsuit won’t solve our problems,” said attorney Kyrsten Sinema, who serves in the Arizona state Senate. “It won’t solve the immigration crisis all of us face in this country,” Sinema said.

A throng of opponents were kept back by police, but jeered and shouted “We are not illegal” at the governor, who had to speak loudly to be heard over the demonstrators.