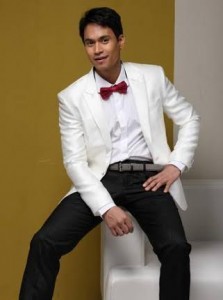 Apparently, he believes that marriage is a right that people should be able to enjoy, regardless of their sexual preference.

He reasoned, “We’ve undergone a lot of changes through the years and we have learned to accept a lot of things. Why don’t we give same sex marriage a chance?”

In the story, he plays a closeted gay lawyer in a relationship with a filmmaker played by Oliver Aquino.

The filmmaker wants to marry the lawyer who is having second thoughts on the matter.

“It is because in the story I caught Oliver’s character with another man,” Arnold explained.

He related the thrill of working with Oliver.

“We did a lot of improvisation in a lot of our scenes. Like in our fight scene, we didn’t have a script to follow. We based our actions on how much we know each other, our characters and our emotions. We even ended-up in a fist fight,” he described.

So what do you think is the message of “Kasal,” we asked Arnold.

He won as Best Supporting Actor for his performance in GB Sampedro’s “Astig.”

This is also his third time to portray a gay character. His first was in “Imoral,” followed by “Muli” – both by Adolf Alix. (MNS)

Robi Domingo admits thinking of settling down with girlfriend