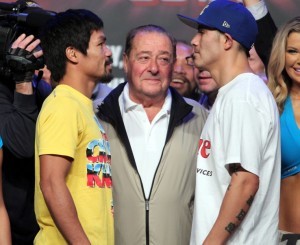 Arum said Henares should have asked the U.S. Internal Revenue Service (IRS) for the document herself.

“My question is why, this lady, as the head of the tax bureau in the Philippines, didn’t ask her counterpart in the United States for such a certificate?” Arum questioned. “She put the burden on Manny.”

“Manny requested the certificate from the IRS, and I am sure the certificate will be coming in the next week or so, but it’s not Manny’s fault. It’s her fault,” Arum stressed.

“I mean, she is the representative of the sovereign government of the Philippines, and the IRS is the agency of the sovereign nation of the United States of America,” he added. “The two governments should have corresponded with each other to get the certificate, instead of putting the burden on the individual to get the certificate from the country, which he isn’t even a citizen of.”

Arum further noted that Pacquiao, as an “icon and a congressman,” is not an ordinary citizen.

Arum said they have already asked the IRS for a copy of the document that the BIR is asking for but the long wait for the certificate cannot be helped.

“If she wanted the certification quicker, she should have asked for it herself,” Arum said of Henares. “But the one thing she should have never done is to freeze this man’s bank accounts because of her own ineptitude.”

The BIR issued a warrant of garnishment of Pacquiao’s bank accounts following the fighting congressman’s failure to provide the bureau with a copy of his tax return filed with the IRS.

Henares said the BIR has been waiting since 2010 for a copy of the certificate. They received a document from Top Rank saying that the company had paid the correct taxes on Pacquiao’s behalf, but Henares said that document was “useless.”

Pacquiao in a press conference on Tuesday claimed that he is financially paralyzed because of the garnishment such that he had to borrow money just to fulfill his promise to help the victims of Super Typhoon Yolanda.

Arum also clarified that they have regularly paid the IRS 30% of Pacquiao’s earnings, whether from his fight purses or from the endorsement deals he has done in the United States.

“That is the law in the United States. When a non-resident alien like Manny Pacquiao fights or performs services in the U.S., you are required to withhold 30% of the money that goes to him and pay it to the US IRS for taxes,” he said.

“Each time we pay the taxes, we wire the money to the IRS accounts, and the IRS acknowledged the payment. We sent those documents to her,” Arum added, referring to Henares.

Pacquiao’s lawyer, Atty. Remegio Rojas, said they have submitted all documents required by the BIR, including the access code that the bureau can use to check on the boxer’s tax returns in the United States.

The Court of Tax Appeals is set to hear Pacquiao’s case on December 5.

Pacquiao’s revelation of his tax woes came just two days after he routed Brandon “Bam Bam” Rios in his first fight since a one year layoff from boxing, a victory that served to revive his career and lift the spirits of the Filipino people.(MNS)