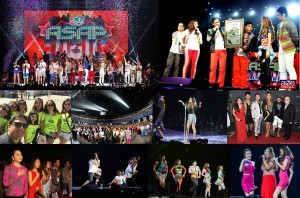 LOS ANGELES, CA, October 15, 2014 – When asked to describe in one word what ASAP Live in LA would be at the packed press conference that was livestreamed on TFC.tv and TFC20.com/ASAP last October 8 from the Los Angeles Memorial Sports Arena, the following cast members said:

Gary Valenciano: “I wanted to add on to what everyone said and it has to do with why ASAP is where it is today.  You have a bunch of artists here and there are many more artists out there.  But there is a reason why we are chosen to be part of this show. I think that God has a great plan for why we are a part of this show. So, the word I’m going to choose is ‘blessed’.”

Indeed, the words of TFC’s 20th Anniversary Ambassador Valenciano and his nine press con co-panelists were veritable harbingers of what ASAP Live in LA last October 11 turned out to be.
Not the power-packed joint concert of superstars Enrique Iglesias and Pitbull in Staples Center, or the multi-cultural, multi-act Super Sonico Festival brought by the teams of LAMC and Coachella to Shrine Auditorium, or the touring and local culinary stars of James Beard Foundation’s Taste Los Angeles in Vibiana could distract 12,000 Filipino fans from trooping to historic Los Angeles Memorial Sports Arena to take part in the day-long festivities climaxed by a one-of-a-kind three-hour, live, world-class Filipino entertainment.

When ABS-CBN and TFC North America promised 40 stars would perform at ASAP Live in LA, they actually meant at least 40.

Believing in always putting great value for the money that TFC subscribers and fans pay, ticket buyers did not only get a star-studded complement of talented cast members from the Philippines; they were treated to spectacular on-stage collaborations with U.S.-based Filipino singing greats like Jam Morales, Ella Mae Saison and Tootsie Guevarra, and international Fil-Am superstars like apl.de.ap of Black Eyed Peas and Jessica Sanchez of American Idol fame.  Also acknowledged at the show were well-known Fil-Ams from the Hollywood industry like Tia Carrere, Reggie Lee, Mark Nicolas and Fritz Friedman.

Carrere told Balitang America: “ASAP was amazing. What a monster concert! I mean, Apl being here, Charice, Jessica Sanchez, and all these stars from the Philippines, I’m so happy to be able to be introduced to them. It’s three hours of non-stop energy here. I can’t wait to see it on TV.”

While ASAP director Johnny Manahan, ASAP Business Unit Head Joyce Liquicia and their Manila team in collaboration with TFC North America production team led by John-D Lazatin made sure that everything from the production numbers to the costumes to the technical set-up lived up to high standards, everyone in the cast and crew knew that they were here to deliver more than just entertainment.

“You are talking about people flying in from as far as Alaska, Hawaii and Canada and fans representing by creating their own ASAP Live in LA attires. You have people who saved their dollars and planned their work vacations so they can watch the show. We all know that what we should give are more than song-and-dance numbers; we are here to give our hearts, our love, our Kapamilya spirit and Pinoy soul to them. We want them to feel they’ve come home,” said TFC North America ASAP Live in LA Project Lead Ricky Resurreccion, also the region’s head of Ad Sales, Trade Marketing & Events.

So, the stars braved a thunderstorm, flood, traffic and no sleep to catch their flights from Manila to Los Angeles, mingled with fans as they visited Los Angeles landmarks to tape segments, took part in a Meet and Chat with lucky ticket holders, rehearsed to perfection and tirelessly shared their experiences and activities on social media for their millions of followers around the world.
Promoting Filipino presence, the City and County of Los Angeles tourism and voter mobilization for the coming November elections also did not go unnoticed by the Office of the Mayor.  Through the assistance of Los Angeles Philippine Consul General Leo Herrera Lim, Filipino American Service Group, Inc. Executive Director Susan Dilkes and West Valley Area Representative Max Reyes, Los Angeles Mayor Eric Garcetti issued a Proclamation making October 11, 2014 ABS-CBN The Filipino Channel’s “ASAP Live in LA” Community Empowerment Day.  ABS-CBN Integrated News and Current Affairs Head Ging Reyespresented the Proclamation to the crowd before the show show while Valenciano and Nievera led a group that presented it anew to the audience. ina

Filipino filmmaker takes on Manhattan with a controversial topic

Toni excited to have her own baby