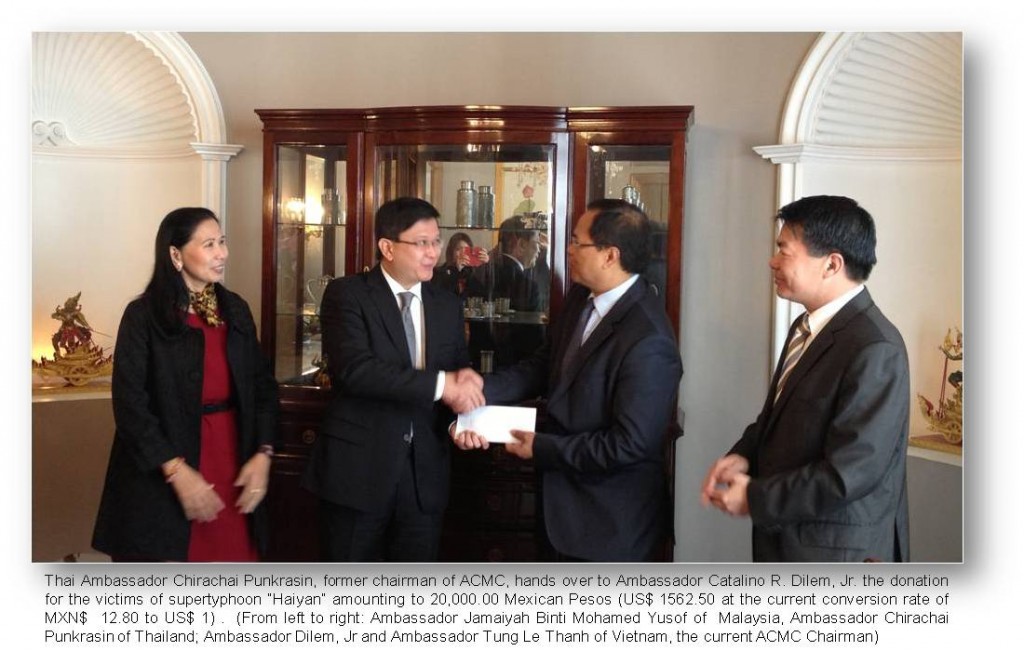 The Association of Southeast Asian Nations (ASEAN) Committee in Mexico City (ACMC), the formal organization of ASEAN member-states with resident missions in Mexico, namely Indonesia, Malaysia, the Philippines, Thailand and Vietnam, has donated, through the Philippine Embassy in Mexico,  20,000.00 Mexican Pesos (US$ 1562.50 at the current conversion rate of MXN$ 12.80 to US$ 1), from the proceeds of the 2013 ASEAN Bazaar held in Mexico City on 09 November 2013, as the group´s contribution to the Philippine relief and rehabilitation efforts caused by supertyphoon Yolanda (Haiyan).

The amount was turned over to the Embassy during the meeting of the ACMC on January 24 at the Royal Thai Embassy, on which occasion the ACMC chairmanship was formally transferred from the ambassador of Thailand to his Vietnamese counterpart for a six-month term.

Upon receiving the donation from Thai Ambassador Chirachai Punkrasin, Philippine Ambassador to the  United Mexican States Catalino R. Dilem, Jr. expressed the Philippine government´s  appreciation for the ACMC´s contribution to help rebuild the areas in Central and Eastern Visayas devastated by the supertyphoon and thereby restore normalcy to the lives of its stricken residents.  The donated amount represented almost half of the proceeds from the 2013 ASEAN Bazaar, totaling 42,150 Mexican pesos.

Galvez: 50% of Filipinos fully vaccinated vs. COVID-19 by yearend