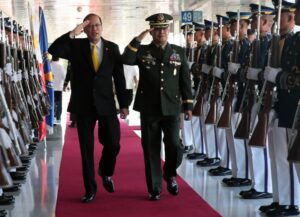 MANILA (Mabuhay) — Southeast Asian leaders waited for only “less than a minute” for President Benigno Aquino III to join them for their group photo at the recently concluded Association of Southeast Asian Nations (ASEAN) summit in Malaysia, Malacañang said Wednesday.

“He [Aquino] was just delayed getting into the hall. He came from the rest room,” Communications Secretary Herminio Coloma Jr. said in a text message.

The Palace official issued this statement after Singaporean Prime Minister Lee Hsien Loong posted a photo on his Facebook account poking fun at Aquino, who was late for the ASEAN leaders’ group photo.

“Waiting to take the traditional leaders’ photo, but someone’s missing. #guesswho :),” Lee captioned a photograph of ASEAN leaders while waiting for Aquino.

The photograph was met with criticism by some netizens, who berated Aquino for his tardiness.

Earlier this year, Aquino, who returned to the country from the ASEAN Summit on Tuesday, also drew flak online for arriving late during the necrological service for slain police commandos during the January 25 Mamasapano operation.(MNS)