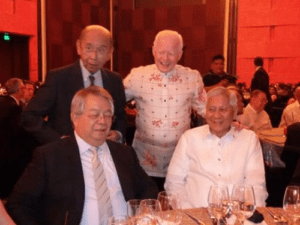 WASHINGTON, D.C. – In recognition of excellence in leadership, Ambassador Jose L. Cuisia, Jr. was conferred the Lifetime Contributor Award (public sector) by the Asia CEO Forum on 11 November 2015 at the Marriott Hotel in Manila.

Each year, the Asia CEO Awards recognizes extraordinary leaders and leadership teams who have demonstrated outstanding achievement for their organizations and contributions to their fields.

In his acceptance speech, Ambassador Jose L. Cuisia, Jr. thanked the organization for the award.

“I am deeply humbled to be receiving the Lifetime Contributor Award. I offer my sincerest appreciation to the Asia CEO Forum, represented by Mr. Richard Mills and the board of judges, for this tremendous honor. I also wish to congratulate my fellow awardees for their sterling achievements,” said Ambassador Cuisia.

He described his entry into the diplomatic world as a milestone in his professional journey and talked about the unique responsibility of every Philippine Ambassador to the United States to harness the potential of the 3.4 million-strong Filipino-American community.

“I never imagined I would ever become a diplomat. For this, I have President Aquino and Foreign Affairs Secretary Del Rosario to thank for entrusting me with one of the most sensitive diplomatic posts of our country – to serve as the Philippine Ambassador to the United States. While engaging the US Government on a wide spectrum of issues was a given, there was also a need to manage the diverse and complex relationships that make up the Filipino diaspora,” Ambassador Cuisia explained.

The envoy also highlighted the importance of leadership by example, something he learned from serving various administrations.

“There is much to be said about leadership by example, and I have had the great privilege of serving three Philippine presidents whose unimpeachable characters continue to influence my leadership style. From President Cory Aquino, who was uncompromising in her beliefs and principles, I learned humility and a strong sense of purpose. President Ramos, on the other hand, redefined the word ‘thorough’ by institutionalizing complete staff work, or CSW, in government, thus strengthening my own work ethic. As for President Benigno S. Aquino III, the courage of his convictions evidenced by his unwavering commitment to Daang Matuwid and the rule of law profoundly deepened my sense of integrity. These remarkable leaders compel me to likewise lead by example, for which colleagues have expressed their appreciation a number of times,” said Ambassador Cuisia.

Ambassador Cuisia also underscored the importance of developing the next generation of leaders.

“In Washington D.C., we have the Filipino-American Youth Leadership Program or FYLPRO. Many of you are our partners in this annual FYLPRO program, which, to date, has brought 40 young Fil-Ams to the Philippines. Describing their time here as a “transformative” experience, they are creating an impact in their communities through various legacy projects,” the envoy stated.

Asia CEO Awards is the largest business awards event in the Philippines and one of the largest events of its kind in the Asia Pacific region. Its purpose is to promote the ASEAN region as a premiere business destination.