Asian fighters cash in on rise of mixed martial arts 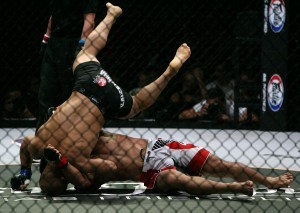 ONE FIGHTING CHAMPIONSHIP: Rise to Power Mixed Martial Arts at MOA The Arena May 31: Lightweight Iranian Kamal “The Prince of Persia” Shalorus, (upside down) about to pin Filipino Fighter Eduard “The Landslide” Folayang, to the canvas on his way to beating the Filipino martial arts fighter. PHOTO: BOY CABRIDO/Weekend Balita

(MANILA-AFP) – In a caged ring at a newly built sports arena in the Philippine capital, 20 martial artists from around the world try to choke out, knock down or submit each other for thousands of paying fans.

Scantily clad ring girls saunter on stage in between rounds to loud rock music and cheers, part of the razzle and dazzle of professional mixed martial arts, or MMA, that is hugely popular in the United States and is growing in Asia.

For home town hero Eduard Folayang, MMA has been a ticket out of a career as a lowly paid school teacher and a chance to expand on his skills as one of the world’s top practitioners of wushu, an ancient Chinese martial art.

“I wanted a different, higher level of martial arts, and that was my motivation in turning pro,” Folayang, who won a wushu silver medal at the 2006 Asian Games, told AFP.

MMA pits fighters with different martial arts disciplines in a cage wearing thinly padded, open-fingered gloves, with the aim of submitting or knocking each other down.

Unlike boxing, fighters can grapple, kick, choke, throw and punch their opponents.

For the past two years, the soft-spoken Folayang has steadily built a cult following among fight aficionados for his fearless striking game rated as among the best and most exciting in the region.

He trains day in and day out for a life devoted to combat under the Singapore-based One Fighting Championship (One FC), the sport’s biggest promoter in Asia.

As MMA begins to take root in the region, fighters such as Folayang have found a way to continue with their careers and earn big money in the process.

While Folayang’s contract bars him from disclosing how much he earns, he said his career as a caged-ring fighter gave him a much more comfortable and enjoyable life than if he was still a school teacher.

“It is more than enough, and if you love what you’re doing then everything else follows,” he said. Folayang is a member of Team Lakay, which includes five of his former Filipino wushu team mates.

Folayang also insisted a sport that appeared brutal was in fact relatively safe.

He said bouts followed strict rules, were supervised by highly trained referees and sanctioned by gaming bodies to ensure all fighters were in good medical condition.

Victor Cui, a Filipino-Canadian who was a former executive of a major American sports network, launched One FC out of Singapore two years ago, looking to emulate the astonishing success of the sport in the United States.

“I just could not believe the growth opportunities. You are talking about a sport that is a $3-billion industry in northern America and it’s just at its infancy in Asia,” he said.

Rival organisation UFC launched MMA in the United States in 1993 and its pay-per-view television deals now are often more lucrative than for professional boxing.

Cui said he estimated that pay per view revenues from MMA in the United States averaged 500 million dollars a year, twice that of boxing.

Cui, a black-belt in taekwondo, said a few years ago MMA in the Philippines and elsewhere in the region was mostly organised in small crowded halls by local promoters.

While One FC has yet to penetrate the biggest Asian markets, such as China and India, it has started to make significant inroads elsewhere around the region.

At the recent event in Manila, 20,000 fans filled the Mall of Asia Arena to capacity. One FC said 12,500 people attended a Singapore fight night in April.

Organisers are hoping to stage 36 more bouts throughout Asia before the end of next year, with the next confirmed event in Indonesia in September.

One FC also signed last year a decade-long agreement with pan-Asian television network Star Sports to broadcast the fights across the region.

Cui said he believed MMA could be even more popular in Asia than the United States, citing the deep histories of various martial arts in the region.

American ex-UFC heavyweight champion Tim Sylvia is now a part of the One FC stable and agreed that Asian fans had a much greater appreciation of the complexities of MMA than those in the United States.

“The fans here are so much better than in the US. They know more about the sport,” Sylvia said in Manila before a surprise loss to an American wrestler.

“They respect the fact that this is what we do for a living, and there are no drunks cursing in the rafters.”

Brazilian Bibiano Fernandes, a six-time jiujitsu world champion who as a child scavenged for food in the Amazon before fight coaches discovered his talent, is another big name enjoying life in Asia.

“I think I am just blessed to be here fighting,” Fernandes said as fans mobbed him after beating a Japanese rival.

For Folayang, his night in front of a home crowd ended with a bruised body and a hurt ego after a more experienced Iranian wrestler took him down for most of the bout, but he remained upbeat.

“It was a wake-up call for me, but that’s how MMA is,” he said. “You win big sometimes, but get broken sometimes.”