(HONG KONG-AFP) – Asia’s thirst for rare and fine wine is moving beyond the dining table as the industry seeks to tickle the region’s capital markets as well as its taste buds. 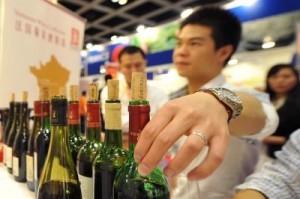 In a photo taken on November 3, 2011, a buyer reaches for a bottle of wine at the Hong Kong International Wine and Spirits Fair. Asia's thirst for rare and fine wine is moving beyond the dining table and into the boardroom, as the industry seeks to tickle the region's capital markets as well as its taste buds. Â©AFP PHOTO / AARON TAM

“Wine is a very passionate subject, much more so than stocks and shares. It’s a passion as well as an investment for our clients,” said Stephen Wickens, the managing director of Wickens & Co, a Hong Kong-based wine investment firm.

“It’s a very safe investment and it’s very attractive at this time when people are uncertain about the stock and property markets.”

Two thirds of the 18-month-old company’s clients, totalling about 500, come from China and Hong Kong. Wickens reckons his client base will double next year.

“Right now Asia is really driving the demand. The traditional markets of Europe and America are very slow,” he said on the sidelines of a wine trade fair in Hong Kong this month, which drew a record 934 exhibitors.

Hong Kong has capitalised on the rapid expansion of personal wealth in China to become the dynamic centre of Asia’s wine trade since it abolished duties on wine imports in 2008.

The wine industry council in the French region of Bordeaux says local producers saw a 92 percent surge in export volumes to China in the 12 months to July, and a 69 percent increase to Hong Kong.

To capitalise on this, businesswoman Ling Zhijun has just launched Dinghong, mainland China’s first investment fund specialising only in wine — available only to those with one million yuan ($160,000) or more at their disposal.

She is waiting for the green light from authorities to start raising money, but says she already has investment pledges from a dozen people and will be able to collect 200 million yuan by the end of the year.

“We’re banking on a return on investment of 15 percent a year,” she said, adding she chose to focus only on French wines because those from the New World are “more standardised, a bit like Starbucks coffee”.

Hong Kong’s Wing Lung Bank, meanwhile, launched a wine financing service, the first in the southern Chinese city, in April this year to allow investors to borrow to buy wine at designated merchants.

Buyers can borrow up to HK$5 million (US$650,000) with a repayment period between one and five years, and the response has been “overwhelming”, said assistant general manager William Tang.

“Like many other businesses, the wine industry takes advantage of Hong Kong as the gateway to mainland China, where increased prosperity and changes in lifestyle have led to a significant rise in the demand for wine,” he said.

“People in Hong Kong and China have become more knowledgeable over their favourite wines. All of these help raise peoples interest in investing or purchasing wine, resulting in the growing demand on wine financing services.”

But if they are looking for a place to shelter from the headwinds buffeting the global economy, Asia’s new wine speculators might be disappointed. Wine prices have fallen about 15-20 percent this year, according to Wickens.

“This is a market correction. It’s not a bubble bursting or another disaster in the market, and we still see some wine going up in value, such as the Domaine de la Romanee-Conti and Petrus,” he said.

“Wine is not just a piece of paper, it’s a physical item. It has some tangible value, it’s unlikely to go zero,” he added.

Investors are advised to put their money away for the medium to long term, and target batches of young wines at their initial release price.

The wine can also be bought “en primeur”, where a specific vintage of wine is bought before it is bottled and sold in the market two or three years later.

He said the tight supply of fine wine, due to the limits of how much can be produced each year, make it a scarce commodity.

“There are more companies coming to us and there are more private investors who are trying to diversify their portfolio. It’s growing all the time.”