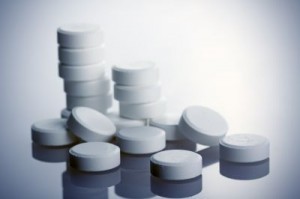 (PARIS–AFP) – Daily, long-term doses of aspirin can slash the risk of cancer of the digestive tract, according to an overview of research published on Wednesday.

Aspirin greatly reduces the risk of developing and dying from bowel, stomach and oesophageal cancer, its authors said.

They found that taking aspirin for 10 years could cut bowel cancer cases by around 35 percent and deaths by 40 percent.

Rates of oesophageal and stomach cancers were cut by 30 percent and deaths from these cancers by 35-50 percent.

To gain these benefits meant people had to start taking a daily dose of 75-100 mg for at least five years and probably 10 years between the ages of 50 and 65.

No benefit was seen while they took aspirin for the first three years, and death rates were only reduced after five years.

Aspirin has long been considered to be a boost in the fight against cardiovascular disease and has also been investigated for reputed anti-cancer effects.

This is the first to throw up broad evidence that it can be a shield against these types of cancer, the scientists said.

The study, published in the European cancer journal Annals of Oncology, was led by Jack Cuzick, a professor at the the Centre for Cancer Prevention at Queen Mary University of London.

It looked at more than 200 clinical trials and other studies that explored aspirin’s anti-cancer effects.

“Our study shows that if everyone aged between 50-65 started taking aspirin daily for at least 10 years, there would be a nine-percent reduction in the number of cancers, strokes and heart attacks overall in men and around seven percent in women,” Cuzick said in a press release.

“The total number of deaths from any cause would also be lower, by about four percent over a 20-year period. The benefits of aspirin use would be most visible in the reduction in deaths due to cancer.”

The research said there was a downside to taking daily doses of aspirin — potential side-effects such as peptic ulcers and bleeding in the digestive tract. In a very small number of elderly people, the bleeding could be life-threatening.

It said further work was needed to see who would benefit most from taking aspirin and determining the right dose to maximise the protective effect.

“It has long been known that aspirin – one of the cheapest and most common drugs on the market – can protect against certain types of cancer,” Cuzick said.

“But until our study, where we analysed all the available evidence, it was unclear whether the pros of taking aspirin outweighed the cons.”

Cuzick added: “Whilst there are some serious side effects that can’t be ignored, taking aspirin daily looks to be the most important thing we can do to reduce cancer after stopping smoking and reducing obesity, and will probably be much easier to implement.”