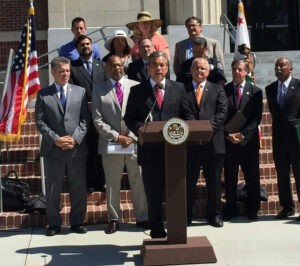 Assemblymember Rob Bonta explained the historic impact the proposed regulations will have in the state. “The Medical Marijuana Regulation and Safety Act will usher in a new era for California.  If the Governor signs the act, patients will have more assurances that their products are safe; law enforcement will have a foundation to identify drugged drivers and increased funding to protect the public; the environment will be protected from neglect, destruction, and water diversion; and the medical marijuana industry itself will be able to come out of the shadows and receive the same protections under the law as other state-licensed businesses, creating jobs and contributing to the economy.”

California was the first state in the nation to allow for the medical use of marijuana with the passage of Proposition 215 nearly two decades ago, leading the charge ahead of 22 other states and the District of Columbia. However, California still lacks a comprehensive regulatory framework for the medical marijuana industry. The three bills that the Legislature sent to Governor Brown include AB 266, AB 243, and SB 643. Together they mark the furthest legislation has ever gone in the state to establish a comprehensive regulatory framework for medical marijuana to ensure patient access, as well as to protect the environment, public safety, and public health.

“Through an unprecedented bipartisan effort, my colleagues and I presented the Governor with a legal framework to finally address the medical marijuana issues that have been prevalent in California since 1996, when California became the first state in the nation to allow the use of medical marijuana,” explained Assemblymember Jones-Sawyer. “This unprecedented collaborative effort will finally regulate the medical marijuana industry in a smart and comprehensive way that respects the interests of local government while still providing a consistent statewide structure.”

Assemblymember Tom Lackey, the only Republican author of AB 266, discussed the significance of the bipartisan partnership that was forged this year. “As a 28-year veteran of the California Highway Patrol, I personally observed an increase in drugged driving after the passage of Proposition 215. For nearly 20 years, lawmakers have been unsuccessful at curbing drugged driving. The act helps pave the way for law enforcement to develop strategies to identify impaired drivers. Colorado recently released a report showing nearly 1 out of 5 car crash deaths in 2014 were marijuana related. With legalization initiatives circulating, we would be foolish not to address this public safety red flag right now.”

The authors were joined by Kim Raney, Chief of the Covina Police Department and former President of the California Police Chiefs Association. “In 2013, the leadership of the California Police Chiefs Association elected to sponsor medical marijuana legislation in concert with the League of California Cities. Previously under the leadership of then Senator Lou Correa, and now under the leadership of Assemblymembers Bonta, Cooley, Jones-Sawyer, and Wood, we were able to transform a conceptual proposal into an all-encompassing regulatory package that establishes a balance between California’s communities’ ability to preserve influence over medical cannabis distribution within their borders and the right of California’s citizens to access medical cannabis as provided for in Proposition 215. We are proud of the regulatory package on the Governor’s desk.”

The press conference was one in a series of statewide press conferences held by the authors and supporters of the landmark legislation. The series began in Oakland, with others planned throughout the state, including San Diego, Santa Rosa, and Sacramento. Assembly Speaker Toni G. Atkins, whose leadership was instrumental in crafting the proposals, will join the authors at the Hall of Justice (330 West Broadway) in San Diego this Wednesday at 10 a.m. to ask for Governor Brown’s signature on the historic package of bills.

Pacquiao down to work for ‘fight of my life’