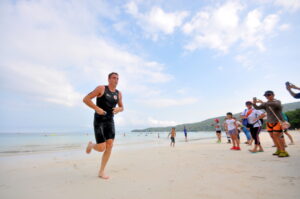 Australian wins Sarbay triathlon in Gumasa, Sarangani (May 19, 2015): Michael Murphy, an Australian triathlete representing the Red Cross, leads the pack of 65 competitors in the 2nd Sarbay triathlon on May 16. Murphy was the over-all male standard winner who finished the swim, bike and run in 2 hours, 22 minutes and 48 seconds. Before winning the Sarbay triathlon, he had already conquered five big triathlon events as recently placing 5th in the 2015 Place Challenge Philippines, and four major events in 2014

GUMASA, Sarangani  – The 2nd SarBay Swim-Bike-Run for the Environment triathlon tested the gears and grits of every participant as the course was designed to be more challenging this year.

Early morning on May 16, 65 triathletes answered the gun start at the white sand shore of Gumasa, Glan for the highly-anticipated triathlon organized by the provincial government and Smart Communications.

There were alterations to the usual route of the triathlon this year making the race more challenging.

However, 36 veteran triathletes were undaunted. They registered in the standard or Olympic distance which included a 1.5-km swim, 40-km bike, and 10-km run or a total of 51.5-km.

Those new in the world of triathlon registered in the sprint category. It is half the distance to be traversed in the Olympic set.

Michael Murphy, an Australian elite triathlete representing the Red Cross, expressed how challenging the race was. He won the Olympic category with a time of 2:22:43.

“The race was unbelievable. It was my first time here in Sarbay (triathlon) and it blew my expectations,” Murphy stated.

“It was one of the toughest courses I have ever been in a bike and run. But what kept me going is the cheers of the children, like there was an entire community supporting you here,” he added.

Murphy also revealed that he is planning to start a training camp in Sarangani Bay to prepare himself for the next SarBay Swim-Bike-Run triathlon of Smart and Sarangani Province.

Mark Alfred Arroyo and wife Collie Castillo Arroyo added a milestone in their married life as they finished the hardened triathlon. Mark finished the race in 03:01:15 while Collie followed 17 minutes later, specifically 03:18:07.

“It was a tough race but we finished it together,” said the Arroyo couple when asked to describe the triathlon.

Surprisingly, young triathletes reigned in the sprint category of the Smart Swim-Bike-Run for the Environment.

“It was a very hard race, especially the running course, where we have to force ourselves just to traverse the uphill and winding roads,” Combatir said. “It was crazy.”

According to Nova Concepcion, senior manager of Smart Community Partnerships for Environment and Disaster Preparedness, the SarBay Swim-Bike-Run for the Environment is not just a regular triathlon, but rather, it was designed for advocacy.

“Originally, it was just a ‘bike for the environment’ but we piloted it in the SarBay Fest (as Swim-Bike-Run) because we want to have an innovative way of supporting environmental causes,” Concepcion said.

“For the past years, we have been raising an amount of support in specific advocacy, and for this year the proceeds will go to a turtle hatchery. It is just an innovative way of supporting something and Smart is known for innovation, so this is just a translation of that corporate responsibility,” she added.

Aside from supporting the Sarangani Bay Turtle Hatchery, Smart will also help the local government in the coastal clean-up after SarBay 2015 and will also conduct a release of some 100,000 bangus fingerlings.

SarBay 2015 is the tenth year of the iconic Sarangani Bay Festival of Sarangani Province. It is dubbed as the biggest beach party in Mindanao, and perhaps in the Philippines today. Web updates powered by SMART. (Ian John Lagare for Sarangani Information Office)