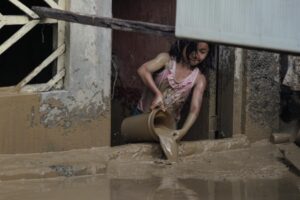 A young girl pours out a bucket of thick mud on Tuesday as she helps clean her home which was inundated by floodwaters brought by Typhoon Lando in Cabanatuan City. The government estimates the damage caused by the super typhoon has surpassed P5 billion, with full report yet to be completed. (MNS photo)

MANILA (Mabuhay) – The Australian government on Thursday pledged P33 million in emergency aid to communities and families affected by Typhoon Lando in the Philippines.

“Australia, as a close friend of the Philippines, is saddened by the loss of life and damage to homes and property in the wake of this tragedy,” Bishop said.

“I commend the government of the Philippines for its leadership and preparedness measures, and for quickly mobilizing its domestic resources to support affected communities and provide timely assistance,” she said.

Australian Ambassador to the Philippines Bill Tweddell said his government would continue to support the typhoon relief efforts as required.

“As a good friend and neighbor, the Philippines can expect that Australia will continue to support its close friend and partner during this time,” Tweddell said.