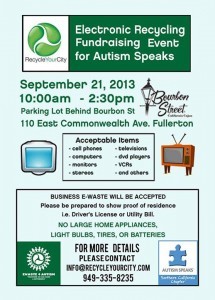 o Izzy Paskowitz, co-founder of Surfers Healing, father to a son with autism, and author of “Scratching the Horizon”

o David Sharif, 16, with autism, whose speech on autism was created into “My Name is David,” a claymation video at http://www.youtube.com/watch?v=C_O0vRTkaaY.

Autism Speaks is the nation’s largest autism advocacy organization, dedicated to increasing awareness of autism spectrum disorders, funding research into the causes, prevention and treatments for autism, and advocating for the needs of individuals with autism and their families. www.autismspeaks.org

According to the U.S. Centers for Disease Control, autism now affects about 1 in every 88 American children, including 1 in 54 boys. Autism is a complex condition that affects a person’s ability to communicate and develop social relationships, and is often accompanied by behavioral challenges.