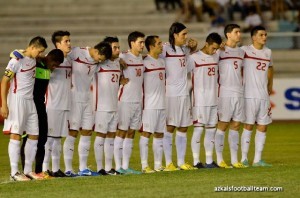 Manila: With less than a week before the pivotal match against a strong Uzbekistan squad, the Philippine national football team, popularly known as Azkals, is appealing to Filipinos to show up at the game venue and cheer for the team.

Azkals coach Thomas Dooley and players Phil Younghusband, Neil Etheridge and Misagh Bahadoran said the fans’ presence and cheers will motivate and spur on the team and have an impact on their game. They were interviewed after a late afternoon to early evening practice session last Tuesday at the Rizal Memorial Sports Complex in Malate, Manila.

The Azkals-Uzbeks match will be held on September 8 at 8 p.m. at the world-class Philippine Sports Stadium in Bocaue, Bulacan, as part of the 2018 World Cup qualifiers.

Dooley acknowledged the difficulty of getting to the venue but said the fans could make the effort in order to boost and give their support to the national team.

“I love to see you guys during the game. It’s very important for us to win this match,” Dooley said as he stressed that the national team is preparing hard for the game.

He hinted that the fans will not get disappointed when they watch the Azkals play live.

“We have a great team. Everybody is working for everybody.”

“We have a game plan, we have skilled players, we have a better plan, hopefully (we will win),” Dooley added.

Dooley said he always reminds the players to stay fit. “I told our players fitness is everything. It’s not me but the players. I give direction but in the end they have to execute the plays.”

Etheridge, one of the goalkeepers of Azkals, said “it will be a fantastic experience if the fans are out there cheering.”

Etheridge, a Filipino-British who has lots of international experience playing in front of big crowds, said it’s a lot different if fans are spurring on the players.

“The players get fired up (if fans are cheering and applauding). Please come and support us,” he said.

Younghusband, the captain and one of the pillars of the Azkals team, said the fans’ cheers always make a difference. “Please come and watch us. Please buy tickets.”

He said seeing the fans celebrating and shouting gives confidence to the players and boosts their adrenaline. “Hopefully people will turn out.”

Younghusband said Uzbekistan is strong team and that they have to step up the level of their game as he noted that the Uzbeks are 50 places about the Azkals in the FIFA rankings.

But what’s going in favor of the Azkals team, Younghusband said, is the international experience of the players as well as their chemistry and good relationships.

“The (Azkals team members) have played high level across the world. They are bringing their competitive experience to the game,” he said.

When asked for his prediction, Younghusband quipped: “One-nil (in our favor).”

Bahadoran, a Filipino-Iranian who is playing right striker and midfielder, appealed to the fans “to come and support us. We will not disappoint you.”

Bahadoran, who scored goals in both the Azkals’ games with Bahrain and Yemen, is confident they will win against Uzbekistan. “It’s 2-1 in our favor,” he said.

He said the team members are in a confident mood and the atmosphere energizes everybody.

Ticket holders of the Philippine Azkals-Uzbekistan match on September 8 are also entitled to a free entrance after the game at the hip The Palace Pool Club in Bonifacio Global City in Taguig and experience Vegas style clubbing.