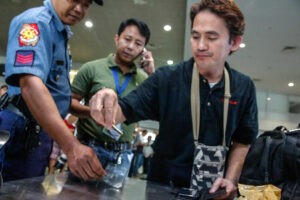 Incoming passenger Rey Salado puts a bullet of unknown caliber in a plastic evidence bag at the Ninoy Aquino Interntional Airport Terminal 3 Arrival area on Wednesday. Salado admitted ownership of the bullet and said he was keeping it as a good luck charm to ward off evil spirits.(MNS photo)

MANILA (Mabuhay) — Traumatic and embarrassing. This is how a balikbayan described how she felt when she fell victim to the “tanim-bala” scam during her visit to the Philippines in 2009.

Rose Valdez, 66, said she and her husband went to the Philippines for a vacation in 2009. She said they were about to return to the US when an airport screener claimed to have seen a 22-caliber bullet in her carry-on bag.

Valdez said she and her husband were brought to another office inside the Ninoy Aquino International Airport where they were detained and questioned. Police also took photocopies of their passports.

The balikbayan said that because of the long wait, her husband surmised that the airport cops were trying to extort money from them.

Valdez admitted they decided to pay the $100 bribe and sign an affidavit claiming that they had been caught with a bullet because they did not want to risk being left behind by their flight.

“No choice ako dahil male-late ako sa flight ko. [I would have to get another ticket],” she said.

She said one foreigner who was also about to take the flight was detained because he had bought a toy gun for his son.

Valdez said she and her husband went back to the Philippines in 2010 to retire for good.

Asked how she felt about the experience, she said: “Very traumatic. Nakakahiya.”

“I can feel for the people who are getting into these kinds of situations. Ma to- trauma ka. Matatakot ka kung ikukulong ka,” she said.

“Based on the stories we hear on the TV, iba ngayon. Grabe, kinakawawa ang tao, this is pathetic talaga.”

Philippine officials are currently investigating claims that a syndicate in the country’s airports are planting bullets inside the luggage of passengers so they could extort money from them.

In most cases, he said the passengers were only carrying empty bullet shells that are used as talismans. (MNS)