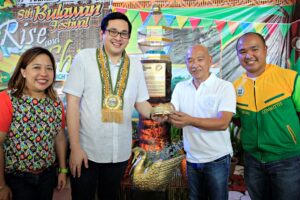 MANILA (Mabuhay) – Despite agreeing with majority of the observations in the Senate committee report on the Mamasapano clash, including President Benigno Aquino III being ultimately responsible over the incident, Senator Bam Aquino felt some parts of the report went beyond the scope of the hearing.

In a press statement Thursday, Sen. Aquino said he signed the committee report , which was released Tuesday, with reservations and with an intention to propose amendments.

Bam is a first cousin of the President.

“As much as we agree with majority of [the] observations found in the committee report on the Mamasapano incident including the President’s responsibility which he himself stated in a public address last month, we feel that there were conclusions made on matters that were beyond the scope of the hearing,” Sen. Aquino said.

Among the conclusions in the report which he wants clarification on were those regarding the peace process, the actions of the government peace panel and the Bangsamoro Basic Law in general.

“We have sent a letter to the committee seeking clarification on these matters. And if need be, we will propose amendments to the committee report when it is tackled on the floor,” Sen. Aquino said.

Bam Aquino is among the 14 of the 20 senators who signed the Senate committee report who have expressed desire to amend parts of it.

Majority Leader Alan Peter Cayetano, in a note beside his signature, said he treats the committee report as partial and he has reservations and wants amendments to it.

He also recommended the continuation of the Senate investigation on the Mamasapano clash.

“(I will file) separate findings/opinion and with strong recommendation to continue and complete the investigation,” he said.

Trillanes earlier said he found the report lacking as material information discussed during the executive session were not made part of it.

He added that he would move for the release of important parts of the executive session in May when the Senate resumes its session. (MNS)