Bangs opens up about ties with Phil Younghusband 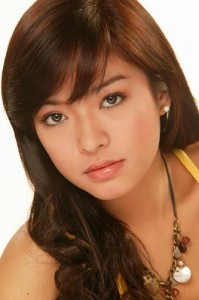 Sexy actress Bangs Garcia finally opened up about her supposed romantic ties with Philippine Azkals striker Phil Younghusband, months after the athlete confirmed that they are “hanging out.”

“We are going out, we’re not hiding. We always go to the malls. We always eat out. We go to Baclaran and we love going to videoke. We love singing. Mahilig kami manood ng sine. Actually a lot of people see us outside. We’re not hiding anything,” she said.

The actress, however, added that they are still getting to know each other.

According to Garcia, she and Younghusband have actually known each other for two years now.

Saying they have many things in common, Garcia said: “Sabi ko para kaming mag-best friends talaga eh. We can talk about anything under the sun. We can just keep on talking the whole day. As in. Of course with the company of his sister and our friends. Marami kaming common friends.”

Asked if things are okay between her and Angel Locsin, Garcia said, “Angel and I are friends and she’s happily with Luis [Manzano], who’s also my friend. Deadma. I don’t care.”