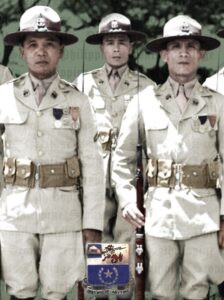 Soldiers of the 57th Infantry Regiment, Philippine Scouts. “They were ready anywhere, anytime.”

Survivors of the Battles of Bataan and Corregidor, and the Bataan Death March, and their descendants will gather in Long Beach on Friday and Saturday, April 24 – 25, at the annual meeting and reunion of the Philippine Scouts Heritage Society.  These men are the soldiers who fought America’s first ground battles of World War II.

The United States Army awarded its first three Congressional Medals of Honor of World War II to Philippine Scouts: Lt. Alexander R. Nininger, Sgt. Jose Calugas and Lt. Willibald C. Bianchi, for their heroic actions on Bataan.  Ultimately, all 80,000 American and Filipino servicemen in the Philippine Islands became Prisoners of War, and more than half of them died in Japanese prison camps.

The Philippine Scouts were a unique and special U.S. Army organization consisting of highly-trained Filipino soldiers, and American and Filipino officers, who formed the backbone of General Douglas MacArthur’s United States Army Forces in the Far East (USAFFE). In the wake of the Japanese attacks on Pearl Harbor and the Philippines on December 7, 1941, the Philippine Scouts were reinforced by U.S. Army National Guard units and joined by Philippine Army Infantry divisions, and ordered to hold back the Japanese advance.  On Bataan Peninsula and Corregidor Island these men were surrounded and starved out by the Japanese Army and Navy, but managed to fight on for more than four months while every other country and island in Southeast Asia and the Western Pacific succumbed to the Japanese.  They bought America time to repair Pearl Harbor and throw a cordon of defense around Australia at the beginning of World War II. 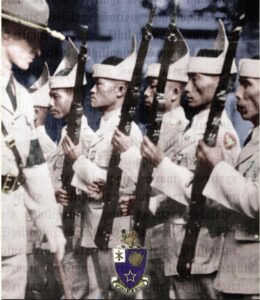 Soldiers of the 45th Infantry Regiment, Philippine Scouts. “They were strong to endure.”

Today, less that 100 of the original 12,000 Philippine Scouts are still with us, scattered around the U.S. and the Philippine Islands. Those who are able to do so will meet in Long Beach, where families and admirers will join them for two days of discussions, business meetings, and celebration.  As their numbers grow smaller, the Philippine Scouts Heritage Society seeks to preserve their memory and raise public awareness of the role these men played in the early stages of World War II, and the horrible treatment they received as prisoners of the Japanese Army.

The Alexander Nininger Chapter of the Society will host its 2015 reunion at the Hotel Queen Mary Friday, April 24 and Saturday, April 25.  The reunion will include exhibits of World War II Pacific Memorabilia, a veterans’ panel discussion of the Battles of Bataan, Corregidor, and the Death March, authors of books about the Philippine Scouts, Living History re-enactors in period uniforms, and a keynote address Saturday evening by Honorable Philippine Consul General Leo Herrera-Lim are all features of the event.

The April 25 “Exhibits and Talks” are open to guests who RSVP to contact person below as seating is limited.

Most Filipinos have no savings – study