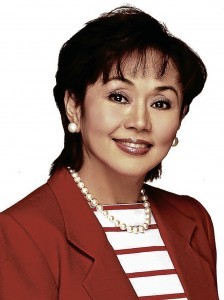 BATANGAS CITY, July 18 (Mabuhay) â€“ In her State of the Province address on Monday, Governor Vilma Santos Recto announced her bid for re-election as the provinceâ€™s governor in the 2013 polls. This ends the speculation that Governor Vi wants to retire and re-focus on her family and showbiz career.

â€œI will continue to be the mother of Batangas, I will continue to be your Governor,â€ she said emphatically, prompting a standing ovation in the partisan crowd. The Salvador H. Laurel Session Hall in the provincial capitol was filled with Batangasâ€™ high officials, including its Vice Governor, Jose Antonio â€œMarcâ€ Leviste, the Sanguniang Panlalawigan, City Mayors andÂ  prominent political figures from neighboring provinces.

Senator Ralph Recto, Governor Viâ€™s husband, was her guest of honor,Â  giving her nods of approval and frequent applause.

The announcement was unexpected even for guests and employees of the capitol who heard the hearsay about the Governorâ€™s early retirement. â€œMabuti at nag anunsyo na si maâ€™am gawa ng napakaraming kurokuro,â€ said one worker.