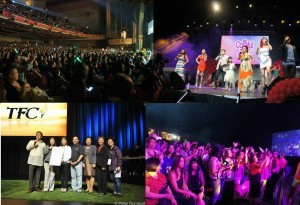 REDWOOD CITY, CA, May 15, 2013 – Social media was crawling with photos and comments the past weekend following the back-to-back concerts of the Philippines’ number one daytime show, “Be Careful With My Heart”, at the Shrine Auditorium in Los Angeles, California last Friday and at Silver Spurs Arena in Kissimmee, Florida on Mothers’ Day.

“It was one of the best Filipino concerts I’ve been to. It was really ka-familia,” echoes Lorna G. Torres.

Event-filled May 10 had the defending Stanley Cup champions Los Angeles Kings going up against St. Louis Blues for Game 6 of their nail-biting Western Conference Quarterfinals series at the famed Staples Center. Award-winning film director Baz Luhrmann’s much publicized, lavish Jazz Age drama “The Great Gatsby” starring superstar Leonardo DiCaprio also opened on the same day. But the City of Los Angeles declared May 10 as “ABS-CBN TFC Be Careful With My Heart Kapit Bisig Day” via a Proclamation signed by no less than Mayor Antonio Villaraigosa and the entire City Council.

The fans trooped to the landmark Shrine Auditorium and filled it to the rafters, making the concert among the most attended events in the venue. On Mothers’ Day, May 12, Florida fans of the show also came in full force to the Silver Spurs Arena to profess their love for Sir Chief, Maya, Abby, Tart, Sabel – beloved characters of the popular TFCteleserye – with world-class singing champions Yeng Constantino and Jovit Baldivino.

Feel Good, Family-friendly Fun
Both concerts – the U.S. leg of an ongoing world tour of the show that already took them to the Middle East and will take them to Canada next – played on the strengths of the top-rating teleserye: it highlighted segments that were light, breezy, feel-good, wholesome (with an acceptable dose of impish humor) and generally upbeat. Stage Director John-D Lazatin and Musical Director Lorrie Ilustre mixed high-energy musical dance numbers with light romantic songs, acting contests, laugh-a-minute dating games that involved the audience, and showstoppers from Constantino and Baldivino.

Rosario “Tart” Carlos (Doris) and Vivieka Vivieka (Sabel) displayed their comic genius and onstage chemistry with their Madonna-Lady Gaga song-and-dance-off layered with a trade of witty barbs and retorts delivered with perfect comic timing. The two comediennes also backed up Jodi Sta Maria (Maya) in the “Be Careful With Your Acting” portion that brought the house down with three gentlemen participants from the audience reenacting a favorite scene between Sir Chief and Maya.

Sta Maria was a beautiful vision on stage, elegant, poised and charming, drawing admiring stares and public declarations of “I love you, Maya” from the audience as she serenaded the crowd with songs like Kaba and Torete from the show’s gold-selling soundtrack.

Mutya Orquia (Abby) had a cute exchange with TFC Barangay USA’s Gelo before doing an even cuter Call Me Maybenumber with Carlos, Vivieka and the dancers.

The decision to intersperse musical segments with video clips from the show that took the audience to a journey of love of Sir Chief and Maya was wise, eliciting swoons and excited screams and shouts from the crowd.

The ear-shattering shrieks, as expected, were reserved for the touring cast’s central male figure, Richard Yap (Sir Chief). As soon as he sang the opening lines of This Thing Called Love, camera flashes flooded both venues as fans tried to capture frame-by-frame the Philippines’ phenomenally popular 40-something matinee idol.

The dating games with Yap concluded with passionate hugs and kisses for him from the chosen candidates to the delight (and perhaps a tinge of envy) from fans in the audience.

Shrieks reached record decibels anew when Yap and Sta Maria performed their much awaited duets, showcasing their indubitable chemistry as one of the country’s top love teams.

The party atmosphere in the house was at its peak when the entire cast did an OPM disco medley for its finale. By this time, the entire audience was on its feet, applauding, cheering, singing along and snapping photo mementos to capture historic moments of the U.S. visit of their most beloved family teleserye from TFC.

“We wanted to deliver the quality entertainment experience that people have come to expect from TFC and we are overjoyed by the positive comments that validated our intention,” said Resurreccion. “We want to thank everyone who supported the event – the cast and crew, our partners and sponsors, the media, the fans, our government officials, and the entire Filipino community for making all these happen.”

“These successful back-to-back concerts mark the beginning of a TFC events season in 2013 that promises only the best for our valued customers all over North America,” said De Jesus.

For more information on the “Be Careful with My Heart” U.S. concerts, please visit tfc-usa.com/events or visit and like TFCUSOfficial fan page on Facebook.

About ABS-CBN International
ABS-CBN International was created over 15 years ago to be of service to all Filipinos. With the launch of The Filipino Channel (TFC), the company became the first and most successful Filipino content distribution company in the U.S. The company offers telecommunication, retail, theatricals, money remittance and cargo services, online audio and video streaming, IPTV, On Demand, along with philanthropic support for Filipinos and the communities they now call home. Based in Redwood City, CA, ABS-CBN International is a subsidiary of ABS-CBN Corporation, the Philippines’ largest entertainment and broadcasting company, through ABS-CBN Corporation’s wholly-owned subsidiary, ABS-CBN Global Hungary Kft. For more information, visit www.abs-cbnglobal.com.