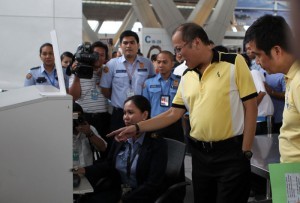 President Benigno S. Aquino III while inspecting the security arrangements and facilities at the domestic departure area, Terminal 3 of the Ninoy Aquino International Airport in Pasay City in this Balita file photo taken last October to ensure the safety of the passengers.

MANILA (Mabuhay) – The Bureau of Immigration has installed 171 passport readers at the Ninoy Aquino International Airport for visitors in 2015, including those coming for major events this year.

BI commissioner Siegfred Mison said the upgrades came in time for the arrival of Pope Francis and the Philippines’ hosting of the Asia-Pacific Economic Cooperation events.

In a post on its Facebook account, the BI said it also installed 160 desktop computers and 141 UPS units at NAIA, and will install more at other airports.

The BI said it expects the upgraded computers and scanners to ease the lines at the country’s major international airports.