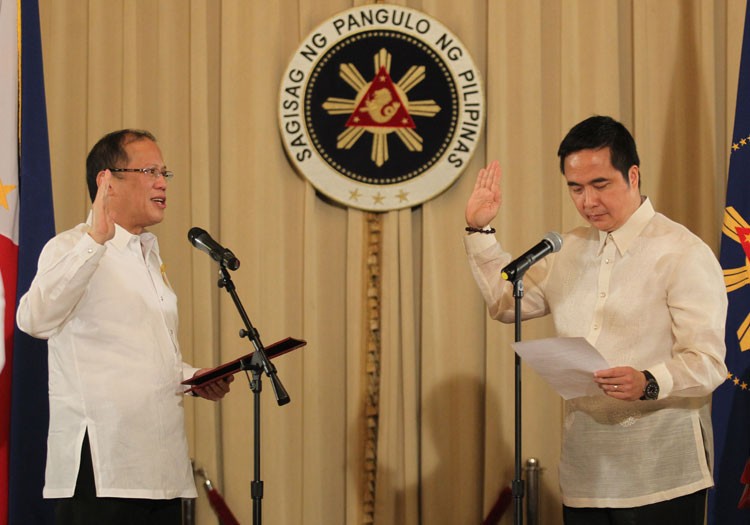 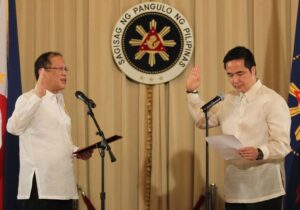 President Benigno S. Aquino III administers the oath of office to former Congressman Joseph Emilio Aguinaldo Abaya as the new Secretary of the Department of Transportation and Communication in a ceremony at the Reception Hall of the Malacañan Palace on Thursday (October 18, 2012). Abaya finished his elementary education at the De La Salle University (DLSU) in 1979. He was a consistent honor student during his secondary school years at the Philippine Science High School (PSHS). He topped the entrance examination for the Philippine Military Academy (PMA) and was sent by the government to the US Naval Academy (USNA) in Annapolis, Maryland, USA where he earned his Bachelor of Science degree in Mathematics in 1988. Abaya proceeded to Cornell University in Ithaca, New York, USA and completed his Master’s degree in Electrical Engineering in 1989. He also studied law and received his Juris Doctor degree from the Ateneo de Manila University (AdMU), School of Law in 2005 and was admitted to the Philippine Bar in 2007. (MNS photo)

MANILA (Mabuhay) – The Department of Transportation and Communications (DOTC) may bid out the proposed Integrated Transport System-North Terminal by middle of next year, once a location has been locked down for the transportation hub.

Transportation Secretary Jun Abaya on Wednesday said the agency is still weighing its options based on the accessibility of the possible sites.

One of the sites being considered is the Veterans Memorial Medical Center (VMMC), which is located along the North and Mindanao Avenues and near the proposed common station to be built in front of Ayala’s Trinoma Mall.

Abaya said the DOTC will hold talks with the Department of National Defense and the Philippine Veterans Affairs Office to discuss the possibility of turning a portion of property into a transportation hub that will serve public utility vehicles to and from North Luzon.

The government-run VMMC sits on a 55-hectare surrounded by a golf course. It was established in 1955 as a donation to the Philippine government by the United States.

Abaya said government will review the deed of donation that specifies provisions on using the property for commercial purposes.

“Kung compliant kami sa deed of donation ng VMMC, then we go up to NEDA [National Economic and Development Authority]. Tingin ko that could be bid out by middle of next year,” he added.

Abaya said the ITS-North Terminal may take up between 3 to 5 hectares of the property.

Other possible sites for the ITS-North Terminal are the Manila Seedling Bank in Quezon City and the property of the National Housing Authority (NHA), which is also near Trinoma.

A budget of P7.7 billion has been approved by the NEDA Board chaired by President Aquino for integrated transportation hubs in efforts to improve traffic flow along Metro Manila’s major thoroughfares by reducing vehicle volume and eliminating provincial buses on EDSA.

Prospective bidders for the P4 billion ITS-South Terminal at the Food Terminal Inc. (FTI) complex in Taguig City have until November 25 to submit their qualification documents.

Bidders for the P2.5 billion ITS-Southwest Terminal project along the Manila-Cavite Expressway, on the other hand, were given until December 1 to submit their qualification documents. (MNS)