It takes more than discipline and determination to land on top of the heap of the weight loss contest sponsored by boxing great Manny Pacquiao for his team.

Sixty three finalists made it to the challenge to lose 15 percent or more of their body weight with some confessing to the hardship they had to undergo to reach that goal.

As if the physical torment was not enough, the mental ability to commit three verses from any book in the Bible was also necessary to win. Winners romped off with the honors and the bragging rights to claim of at least winning in the areas-  finance, physical and spiritual, with the last being the most important part of the competition having committed Bible verses in the mind. 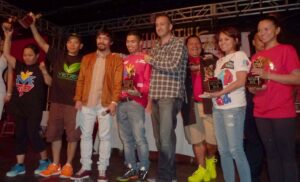 Biggest Losers Win: Winners of the Biggest Loser Contest sponsored by Manny Pacquiao for hit Team Pacquiao and their families beam as they scored triple victories in terms of weight loss and cash prizes for their efforts, and spiritual nourishment.

While all the 63 finalists showed exemplary discipline by not succumbing to the lure of quitting at Temptation Night which occurred on the 30th day of the contest, some had already distinct advantages in hurdling the agonizing process by virtue of their profession and lifestyles.

Arnel Fontanilla and Kharzma Tan emerged winners in the Men and Women Divisions, respectively, and went home each with $12,000.

Fontanilla, a former boxer, knew and had been through the discipline of how to lose weight. He also had the benefit of the privilege of running alongside Pacquiao in his daily grind. Even Pacquiao commented on the stamina of Fontanilla who still would run to his home after the joging which was a good three miles still. 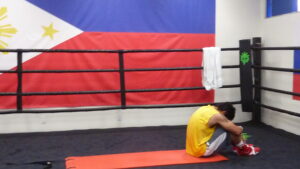 Manny at Rest: Behind the Philippine colors as backdrop in his training room at the Wild Card Boxing Gymn, Manny Pacquiao concludes his day’s hectic training at he prepares for his May 2nd encounter with Floyd Maywearther in Las Vegas.

It was just “hard work and discipline” for Fontanilla, a member of Team Pacquiao who woke up at the crack of dawn to join Pacquiao in jogging and considered it an “honor to run with him daily”.

Fontanilla lost close to 15.4 kg in tipping the scales before a crowd at the Florentine Gardens in Hollywood. A throng of reporters from the U.S. and the Philippines were on hand to witness the five-hour event at the 1930 vintage entertainment center.

Tan, on the other hand, trimmed down on crackers, fruits and exercise to win in the women’s division and was surprised her self as she took it easy resting  in her home in the final six days leading to the ultimate weight in.

Tan,  who has been working in Los Angeles since 2009 said the competition was “fun but tiring” and just wanted to sleep and eat to make up. “I didn’t expect to win because these last six days I didn’t workout. I just stayed home and rested.” She shed off a little over 22% of her weight.

The added feature at the Team Pacquiao camp to the “Fight of the Century had over 100 had signer up with high hopes of winning the $ 10,000 top prize. Contestants had to “lose big”,( at least 15 percent of their initial weight in five weeks),  to take home at least $2,000. Those with lesser resolve were satisfied to a modest amount when they quit when prodded to do so at the Temptation Night held a week earlier.

Apart from dropping weight, the participants were also required to memorize and recite three verses from three different books from the Bible.

he contest was managed by some members of Team Pacquiao and a nutritionist monitoring the participants.

Step by step, Aaron Rodgers making Packers his own

Some 2011 resolutions fulfilled early for many NBA players, teams