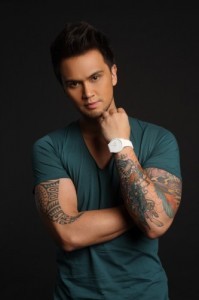 This was the brief explanation of singer-host Billy Crawford when he narrated what happened when he went berserk at a police station in Taguig early Sunday morning.

In an interview after he was held at the police station, Crawford said he was under a lot of stress when the incident happened. He also admitted to being drunk.

“I was under the influence of alcohol. I actually went to the precinct, nasa Fort kami, sabi ko, ‘Pa-hold na lang ako, dito muna ako.’ Of course, they can’t do anything kasi wala naman akong ginagawa so they couldn’t hold me. I walked back outside and called a few people. I asked if they can just hold me. Then I went back and I said to the officer on duty, sinabi ko lang po na ‘Please i-hold niyo na lang ako dito kasi makakasakit pa ako ng tao at makakasakit pa ako sa sarili ko.’ And then nakabasag ako ng salamin,” he said.

Saying he does not remember hitting anyone, Crawford said: “I’d rather myself be held kesa makasakit pa ako or maaksidente pa ako or mabangga pa ako. I was under the influence of alcohol, it was my responsibility, it was my fault.”

Admitting that he is not perfect, Crawford said it is unfortunate that he handled the situation the wrong way.

“Wala akong kaaway. To be honest, lahat naman tayo sumasabog. I’m under a lot of stress that time, fatigue, I was really tired. I actually just wanted to have a good time which turned sour. It was my fault. Wala akong nasaktan, wala akong tinulak, wala akong tinamaan kundi yung salamin,” he said.

Authorities said Crawford may be facing charges of malicious mischief, resisting arrest, direct assault and disobedience of agent of authority.

However, his lawyer said no complaints have been filed against the “It’s Showtime” host as of writing. (MNS)