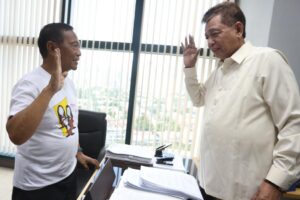 MANILA (Mabuhay) – Vice President Jejomar Binay on Friday denied having anything to do with the fake P500 bills bearing the face of his rival, outgoing Interior Secretary Manuel “Mar” Roxas II that were sent to some journalists this week.

The Vice President admitted though that the text printed at the back of the fake money: “Salapi pa more! Ibulsa ang pera, iboto ang kursonada (More cash! Keep the money, but vote for your preferred candidate)” was the same line that he uttered in the past.

(I have been saying that every election. Ever since I was a mayor, I would utter those words already because my opponent then was confident that he would win because of money, so it became our byword in Makati.)

(It looks like the same thing will happen now, so I have been uttering those words again. But don’t blame me for it.)

(They are doing that and putting the blame on me. I guess there is nothing wrong (when you accept the money and still vote for your preferred candidate) so as not to embarrass the one giving it.)

Binay then reiterated his advice to voters to accept money that will be offered by vote buyers but they should still elect their preferred candidates.

Asked if the fake money was the handiwork of his political opponents, the Vice President simply said: “You have to expect more.”

Roxas earlier pointed to his detractors as the ones behind the fake money as he urged the Philippine National Police and the National Bureau of Investigation to look into it. (MNS)