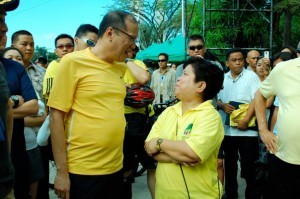 MANILA (Mabuhay) – Vice President Jejomar Binay has expressed outrage over the admission of Social Welfare Secretary Corazon “Dinky” Soliman that hundreds of food packs and sacks of rice were spoiled and dumped in Dagami, Leyte.

“Such act borders on criminal neglect. Thousands of Filipinos suffer from hunger every day, especially those affected by calamities, and yet we have a government that allowed food to rot,” Binay said in a statement on Saturday.

On Thursday, Soliman admitted that sacks of rice discovered dumped in Dagami, Leyte were from the Department of Social Welfare and Development (DSWD) warehouses.

Soliman said the goods buried in the area were “no longer fit for human consumption.”

“The admission by Secretary Soliman only highlights the reality that she has failed to provide the department the efficiency and compassion required in providing immediate aid to calamity victims,” he said.

Binay said it “was not only the first time food for calamity victims had gone to waste.”

In the 2013 annual audit report of the Commission on Audit (COA) on the DSWD, Binay said that family food packs worth P2.8 million for 7,527 families affected by super typhoon Yolanda were lost to spoilage “due to improper handling.”

The vice president also cited Ithe2014 COA report, saying that the DSWD had been left with P141 million worth of undistributed and expired or about-to-expire relief goods.

Binay said the wastage of hundreds of spoiled sacks of rice is “a gross disservice to both the calamity victims who needed all the assistance they could get, and the taxpayers and donors who contributed to the government’s calamity fund.”

“In times of disaster, government should be able to provide immediate relief to the victims. There’s no room for dilly-dallying. Their survival largely depends on government’s ability to extend the needed assistance,” Binay said.

Meanwhile, Senator Ferdinand “Bongbong” Marcos Jr. said Soliman “cannot wash her hands of her responsibility for the wastage of food packs and sacks of rice.”

“Secretary Soliman cannot simply toss the responsibility for this mess to her underlings; she is the one ultimately responsible,” Marcos said in a statement on Saturday.

The senator said someone should be liable for the wastage of hundreds of sacks of rice.

“Can you imagine how many typhoon victims the DSWD could have helped with such amount of relief goods? Surely, those responsible for this are unfit as public servants.  Someone should be held accountable,” he said. (MNS)