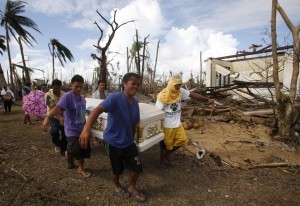 Residents carry a coffin containing the body of a victim of Typhoon Haiyan during a funeral in Tanauan, Leyte, central Philippines November 14, 2013. (MNS photo)

MANILA, Nov. 14 (Mabuhay) – After visiting Iloilo on Wednesday, Vice President Jejomar Binay on Thursday flew to another Yolanda-hit province- Capiz, to continue his conduct of ocular inspection and oversee the ongoing relief efforts for the survivors.

The vice president arrived with his team at Roxas City, the Capiz’ capitol, at around 1 p.m. today.

While at Capiz, Binay will meet with Gov. Victor Tanco to update him on housing sector’s assistance for Yolanda victims.

Moreover, Binay will distribute some relief goods to the typhoon victims.

The whole province of Capiz was declared under state of calamity since Sunday after the super typhoon affected 90 percent of its towns.

According to provincial disaster council’s latest record, the death toll in the province climbed to 42 and 34 persons were reported injured. (MNS)

BBM for Android and iPhone arrives this weekend