Binay will back out from the 2016 presidential race, assures Trillanes 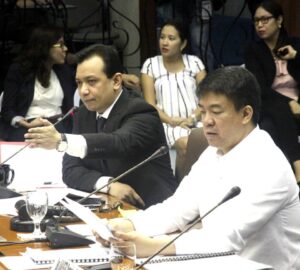 MANILA (Mabuhay) – Now the cat is out of the bag, Senator Antonio Trillanes IV is almost certain that Vice President Jejomar Binay will back out from the presidential race in 2016.

“Tapos na ang boksing. Kahit magaling sila magsinungaling, hindi na nila kayang lusutan ito (Game is over. Even if they’re good in lying, they can’t get out of this),” Trillanes said in a text message to reporters on Thursday.

“Ngayon, kung umatras sya sa kanyang kandidatura, mas makakapamili ang mga Pilipino kung sino ang karapatdapat mamuno sa ating bansa na walang pangamba na maaring may mahalal muli na isang mandarambong (Now if he’s going to withdraw his candidacy, the Filipino people can choose who is the right leader for the country, without worries that the one who will be elected is a thief),” he said.

The senator issued the statement after the media reported the purported report of the Anti-Money Laundering Council (AMLC), which supposedly indicated that a a total of P11 billion had been recorded in the accounts of Binay, his alleged dummies and his son Makati City Mayor Jejomar Erwin “Junjun” Binay Jr. since 2008.

The AMLC report was also said to have been used as the basis of the Court of Appeals when it reportedly issued a freeze order on the said bank accounts.

Trillanes, who initiated a Senate investigation on corruption allegations against Binay and his family, was confident that appropriate charges against the Vice President would be filed in August this year.

And even before the AMLC report and the alleged court freeze order on Binay’s bank bank accounts came out in the media, the senator had already been telling reporters that the Vice President would eventually withdraw from the race.

Trillanes said there are other “intervening” events, aside from the AMLC report, that would make the Vice President withdraw from the race.

“The filing of his Ombudsman case the Sandiganbayan and the eventual suspension of Mayor Jun-Jun Binay. Besides, kilala nang umaatras yan sa mga matitinding laban (he’s known to back out of major battles),” said the senator.

Binay and Trillanes were supposed to face in a public debate in November, 2014, but the Vice President later backed out.(MNS)