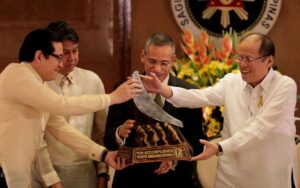 MANILA (Mabuhay) – A Bloomberg survey of economists shows the Philippines will be the second fastest-growing economy in the world this year, second only to China.

Bloomberg’s survey says the Philippines and China will be the only two economies out of 57 included in the report that will grow 6 percent or more this year.

The report is based on average economists’ estimates.

Various analysts have said the Philippines is one of the biggest beneficiaries in the world from lower oil prices.

“The world is expected to grow 3.2 percent in 2015 and 3.7 percent next year after expanding 3.3 percent in each of the past two years, according to a Bloomberg survey of economists. China, the Philippines, Kenya, India and Indonesia, which together make up about 16 percent of global gross domestic product, are all forecast to grow more than 5 percent in 2015,” Bloomberg said.

Malaysia, an oil producer that is being hit by lower oil prices, will see growth slow from 6 percent to less than 5 percent.

Also in the top 5 are Kenya and Nigeria. Many economists are pointing to Africa as the next fast-growth region after Asia. (MNS)