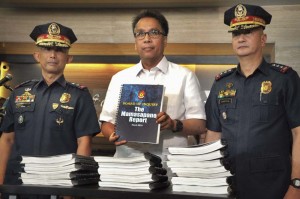 MANILA (Mabuhay) – How can Interior Secretary Manuel “Mar” Roxas II clear President Benigno Aquino III of the botched Mamasapano operation when the Board of Inquiry report shows he was responsible?

That was one of the questions raised by militant group Bagong Alyansang Makabayan (Bayan) on Saturday, a day after the BOI report was released to the public.

“Mar Roxas’ claims that Purisima, not Aquino, should be blamed does not tally with the facts and is inconsistent even with the BOI report,” Bayan secretary general Renato Reyes Jr. said in a statement.

But Reyes said the BOI report made it clear that Oplan Exodus was approved by Aquino.

“It was Aquino who allowed suspended PNP Chief Alan Purisma to participate and run Oplan Exodus despite the latter’s suspension by the Ombudsman. It was Aquino who violated the chain of command of the PNP,” he said.

“It was Aquino who failed to provide strategic guidance insofar as the peace process was concerned, failing to factor in the ceasefire mechanisms in the planning of Exodus,” Reyes explained.

Nevertheless, he said the three main actors in the planning of the mission – Aquino, Purisima and relieved SAF commander Getulio Napeñas – all violated the PNP chain of command.

“The BOI report confirms what we have known all along,” Reyes said, before reiterating their call to oust Aquino.

However, he said the BOI report “stopped short of truly uncovering the extensive role of the US.”

While the report acknowledged the presence of United States forces at the SAF command post during the operation and the rescue mission, it said US involvement was only limited to intelligence sharing and medical evacuation.

“It failed to follow through on a finding that the submission of Marwan’s tissue samples to waiting FBI agents in General Santos City was against PNP protocol. It failed to follow up on the real source of funding for the operation, which came from the US, and not the P100,000 operational budget previously claimed by Napeñas,” Reyes claimed. (MNS)