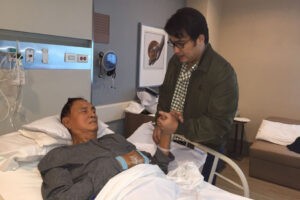 Senator Bong Revilla (right) visits his father, former senator Ramon Revilla, Sr., at the St. Luke’s Hospital in Taguig City on Tuesday. Senator Revilla was given a furlough to visit his 88-year old father who was admitted to the hospital for pneumonia and dehydration since Saturday.(MNS Photo)

MANILA (Mabuhay) – The pretrial of Senator Ramon “Bong” Revilla’s plunder case in connection with the pork barrel scam was reset to February 4, 2016.

At the scheduled pretrial of the case before the Sandiganbayan First Division on Wednesday, the prosecution and the defense requested for more off-court meetings to finish marking their respective evidence that they intend to present during the trial proper.

“In view of the joint manifestation of both parties that they have not completed yet the pre-marking of exhibits, let the pretrial this morning be cancelled and reset to February,” First Division chairman Associate Justice Efren Dela Cruz said.

To give more time for the prosecution and the defense to finish marking their voluminous documentary evidence, the court set additional preliminary conferences starting this Friday and twice a week afterward.

“To enable the parties to complete pre-marking of their exhibits and comparison of the copies against the original, preliminary conference is hereby set beginning this Friday and the following weeks on Wednesday and Friday,” Dela Cruz said.

Present during the scheduled pretrial, Revilla expressed disappointment over the slow proceedings of the case.

Revilla and his former aide Richard Cambe have been detained at the Philippine National Police Custodial Center in  Camp Crame since June last year for plunder and graft charges in connection with the pork barrel scam.

Revilla, in an alleged collusion with Cambe, allegedly amassed P224.5 million worth of kickbacks by allocating portions of his Priority Development Assistance Fund (PDAF), commonly known as pork barrel, from 2006 to 2010 to the fake foundations allegedly owned by businesswoman Janet Lim-Napoles, the scam’s alleged mastermind.

Citing the strong evidence presented by the prosecution team, the court, in December last year, denied the respective petitions of Revilla, Cambe and Napoles to post bail.

The pretrial of Revilla’s plunder case was first on May 21 of this year, but it was moved to September 30 after the prosecution and the defense admitted that they have yet to conclude the marking of their documentary evidence.

The pretrial proceedings signal the start of the trial proper of a case.

During the pretrial proceedings, the prosecution and the defense panels are expected to submit to the court the list of evidence and witnesses they intend to present during the trial proper.

Based on the rules of procedure, only the evidence and witnesses included in the pretrial order list will be allowed to be presented during the trial proper.(MNS)