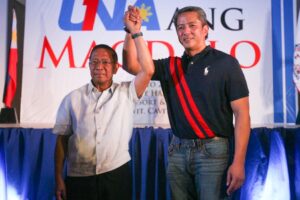 Tiangco said the search committee is looking at six names as possible running mate of Binay when he seeks the presidency in 2016.

He said UNA has a self-imposed deadline of September 30 for Binay’s vice presidential candidate and the party’s senatorial slate.

Meanwhile, Tiangco reiterated that they are not threatened by the candidacy of Interior and Local Government Secretary Mar Roxas, saying they are confident that the Filipino people will continue to support Binay, given his track record in government.

The UNA official, however, admitted that President Benigno Aquino III’s endorsement of Roxas can boost the interior secretary’s presidential bid.

More than that, he said, is that Roxas, being the administration candidate, has the machinery of the government.