Bongbong: I’m lucky to be a Marcos 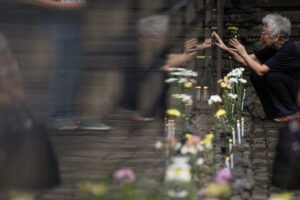 MANILA (Mabuhay) – Amid the negative issues being linked to his name and family, Sen. Ferdinand Marcos Jr.  on Wednesday maintained that he is lucky to be a Marcos.

“I’m thankful that I’m a Marcos. I congratulate myself for choosing my parents very well,” Bongbong said during a news forum in Quezon City when asked if he thinks that being a Marcos is a burden.

He added that being a Marcos has given him an advantage.

“Ang bait ng taumbayan sa amin. I think overall, I grew up to a privileged childhood because I am a Marcos. I was able to go to go to a good school because I’m a Marcos, I was able to enjoy the support of many people. It is all clear to me, it was a lucky thing to be born a Marcos,” he said.

Asked if he does not regret being under the shadow of his father, the late strongman Ferdinand Marcos Sr., the senator said: “It is inevitable, he cast a very big shadow.” 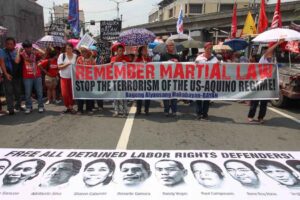 Human rights advocates hold a protest rally commemorating the 43rd anniversary of the declaration of Martial Law at the Mendiola Peace Arch on Monday. The protesters urged the government to uphold human rights and immediately address extra-judicial killings in the country. (MNS photo)

Asked on the supposed crimes of his father, Bongbong said he will leave those matters to the historians to analyze and make judgment on.

“I’m a public servant. All I do is what people ask of their public servant, program, policies to improve their lives…actual solutions to the problems faced by Flipinos everyday,” he said.

On Monday night, Bongbong declared his bid for the vice presidency in the coming 2016 national elections. 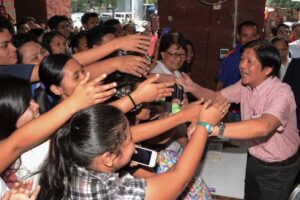 Bongbong said he will support Davao City Rodrigo Duterte in case the latter finally decides to seek the highest elective post in the country next year. Bongbong is from the Nacionalist Party, whose two other members – Sens. Antoniot Trillanes IV and Alan Peter Cayetano – have also declared their intention to seek the vice presidency in 2016.

A day after Bongbong declared his candidacy, however, human rights victims during the Marcos regime vowed to campaign against the younger Marcos’ candidacy.

“Bongbong Marcos’ vice-presidential candidacy is a clarion call not only for the countless victims of martial law, but for all freedom-loving Filipinos to wage the strongest struggle against the resurrection of the Marcos type of rapacious and fascist rule,” said Bonifacio Ilagan, vice-chairman of Selda (Cell), an organization of former martial law prisoners.

Nilda Lagman-Sevilla, head of FIND, a group representing families whose relatives vanished during Marcos rule, said her organization would also campaign against the return of a Marcos to power.

“Some people have shorter memories but the families have not forgotten. We may be in the minority… but we can continue to remind the people of the dark years of martial law,” she said.

But Bongbong’s political adviser, Orlando Balbido, said he believed the senator should be judged on his own merits, and not those of his father’s.

“Are the faults of the father passed down to the son?” Balbido said. (MNS)