Bongbong: No truth to supposed presidential bid declaration in Pangasinan 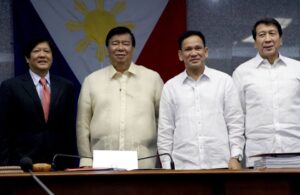 MANILA (Mabuhay) – Senator Ferdinand “Bongbong” Marcos Jr. on Thursday said that there is no truth to a newspaper report that he will announce his presidential bid for next year’s elections in Pangasinan on Sunday.

In a statement, Marcos said that unless the announcement comes from his camp, it should not be given credence.

“There is no truth to reports I would announce my candidacy in Pangasinan this weekend. I have been hearing so many dates of my supposed declaration of my plans for 2016. Unless you hear it directly from me, do not believe,” Marcos said.

The senator, whose name is among those being floated as running mate of presidential hopeful Vice President Jejomar Binay, said that the false advisories are “being spread by an unscrupulous group are intentional” and wants to put his name “in a bad light.”

He said that one such false advisory being proliferated is a supposed announcement of his candidacy at the Philippine Arena last Sept. 20, where attendees were even promised money should they show up at the event.

The senator said that once he reaches a decision regarding his plans for next year, the announcement would come from his camp.

“I have not authorized anyone to speak on my behalf regarding my plans for 2016. When I reach a decision on this matter, you will hear it not from anybody else but directly from me,” he reiterated.

A report from the Philippine Star published last Wednesday said that Marcos will announce his presidential bid in a gathering of political leaders in Mangaldan, Pangasinan, citing statements given by top officials of the newly formed Pagkakaisa ng Mga Pilipino Para sa Pilipinas (PPP).

PPP Chairman Vicente Millora was quoted as saying that Marcos “is definitely running as president, not vice president.” This statement was also affirmed by PPP President Jose Malvar Villegas.(MNS)

The Annual Festival of Philippine Arts & Culture: a two-day hit!