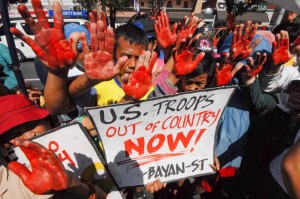 Members of Bayan Southern Tagalog hold a protest outside the US Embassy in Manila, Thursday, condemning the alleged participation of the United States in the Mamasapano operation last January 25. The group also called for President Aquino’s resignation over his accountability for the death of 44 PNP SAF troopers. (MNS photo)

MANILA (Mabuhay) – Senator Ferdinand Marcos Jr. on Monday expressed his commitment to a comprehensive peace process as he reiterated his stance that the pending Bangsamoro Basic Law (BBL) needs to be improved.

In a press statement, Marcos urged the government not to blink in the peace process effort and make it a strong deterrent to armed encounters pending the forging of a final peace agreement.

Congress has temporarily stopped the deliberation on the BBL following the clash.

President Benigno Aquino III has reportedly asked the members of the House of Representatives not to dilute the BBL too much.

Although Aquino has yet to meet with senators regarding the BBL, some senators have already said that the proposed legislation, which will embody the peace agreement, will not be watered down although it will definitely undergo close scrutiny and modification.

He said the creation of the Bangsamoro government, perhaps, would be many steps in the direction of peace, but it will not bring the country to the end it wanted.

“What we need to think about are things like what are the main complaints in Muslim Mindanao [and] why has there even been a secessionist movement that was still in the time of the Spanish, the Americans, and the time of every single president that has sat in that position,” Marcos said.

He said that soon after the Tripoli Agreement was signed, massive development was given to Mindanao to convince the Moro National Liberation Front (MNLF) to abandon rebellion and return to the folds of the society.

“Instead of going to war, instead of going to the hills, those fighters from then the MNLF could find decent jobs, could send their children to school, have a decent living so that they can feed their families, house and clothe their families. And that is what every single Filipino wants and for that matter that is what every single person wants and that is something we have to address,” he said.

Marcos has yet to announce when the Senate will resume its hearing on BBL, which was suspended following the Mamasapano clash. (MNS)

Kris Aquino and LBC team up to connect overseas Filipinos