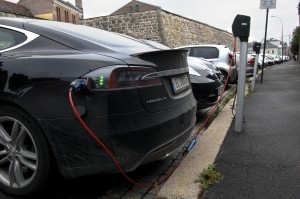 Norway brought in the generous incentives to cut back on greenhouse gas emissions from traffic, which accounts for 10 percent of total emissions in the Nordic nation. The policy has been so successful that 32,000 electric cars are now on the road – by far the highest rate per capita in the world, in a country with a 5.1 million population.
©AFP PHOTO / PIERRE-HENRY DESHAYES

Ministers in Norway – a major and rich oil-producing country – are under increasing public pressure to reduce perks and tax breaks for booming electric car sales.

“It’s become a problem,” said Erik Haugstad, a bus driver in the Oslo region who complains about the numerous electric cars clogging bus lanes, which they have the right to use in Norway.

The cars are also exempt from urban toll payments or fees at public parking spaces, where they can recharge batteries without cost.

But above all, they are exempt from Norway’s sky high sales taxes and VAT.

Norway brought in the generous incentives to cut back on greenhouse gas emissions from traffic, which accounts for 10 percent of total emissions in the Nordic nation.

The policy has been so successful that 32,000 electric cars are now on the road – by far the highest rate per capita in the world, in a country with a 5.1 million population.

“I’m a bus driver and I want to transport my passengers as quickly as possible. So, I’d like electric cars to leave the bus lanes, where they’re getting in my way,” Haugstad said.

“These delays have a cost for society. Time lost by thousands of our passengers in traffic is far greater than that gained by a few dozen electric car drivers.”

He said the cars can create a vicious circle –  tired of being stuck in traffic, bus users could be tempted to buy an electric car themselves, worsening the congestion problem.

Electric cars already represent 85 percent of traffic in bus lanes during rush hour, according to a study by the Norwegian Public Roads Administration on a busy stretch of road outside Oslo.

“It’s a subject we discuss very often with colleagues during lunch break. Many of them are far more aggressive and don’t measure their words as much as me,” Haugstad said.

No decision has been made so far, but it looks increasingly likely that authorities will take action to unclog congested areas – especially during rush hour.

In the meantime, electric car sales keep growing. From the popular Leaf by Japan’s Nissan to high-end US-made Tesla S, they have accounted for 13 percent of new car sales since the beginning of 2014, far ahead of the rest of the world.

In March, the Tesla became the highest selling car in a single month in Norway’s history, despite its relatively high price.

Although a basic model costs about 60,000 euros ($79,000), it still sounds like a bargain considering that a price including taxes would be roughly double.

The popularity of electric cars has caught the authorities off guard, as they expected to keep the incentives in place until 2017, or until they number 50,000.

At the current pace, that figure could be reached in the beginning of 2015, forcing the government to rethink its costly policy.

The tax exemptions alone account for up to 4 billion kroner (500 million euros, $650 million), according to the state’s own estimates.

“But I can promise drivers that there will still be fiscal advantages to driving an electric car.”

The commitment is important, because 48 percent of electric car owners say their main reason for buying them was to save money.

According to a survey by the Norwegian Electric Vehicle Association, only 27 percent said it was for environmental reasons and 12 percent to gain time in their rides.

“It’s too early to remove the fiscal incentives. The market isn’t competitive enough yet” compared to that of fossil-fuel-driven cars, said Christina Bu, general secretary of the association.

“If the tax and VAT exemption ends, the market could collapse and it would be hard for Norway to reach its climate goals. We must increase the number of electric cars, not reduce it.”

Job stress might not be to blame for those extra pounds