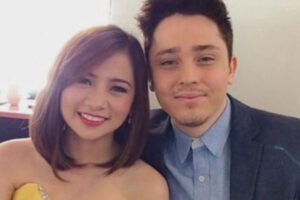 Jackson admitted that he and Cruz are indeed going out. “We date once in a while,” he said.

However, he quickly clarified that they are not a couple yet.

“Right now I’m not at that stage na we’re like a girlfriend [and boyfriend] or something,” he said. “Just dating, dating around.”

Back in May, Jackson and Cruz starred in an episode of a Wattpad series.

Although they have known each other for a while already, Jackson said in a past interview that he and Cruz were never close until they worked together.

Prior to being linked to Cruz, Jackson was in a short-lived relationship with Andi Eigenmann.

Last April, Jackson and Eigenmann admitted that they had ended their relationship, which they chose to keep from the public. (MNS)