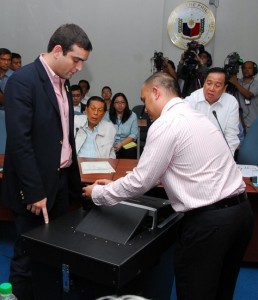 SMARTMATIC-TIM MACHINE DEMO: Senate President Juan Ponce Enrile and Senate Blue Ribbon Chairman Richard Gordon watch closely as Smartmatic-TIM sales director Cesar Flores (left) and technical support manager Miguel Avila (right) demonstrates the machine that will be used in the automation of 2010 polls during a Senate committee hearing today, July 6. “We can no longer stop automation if it can be done. The only thing that we are saying is yes, we will automate but we must not rely fully on automation because there is a possibility, although remote, that it may not work”, Enrile said. (Photo courtesy of www.senate.gov.ph)

MANILA, May 16 (Mabuhay) – A Smartmatic Corporation official on Wednesday night dared the opposition United Nationalist Alliance (UNA) to bring their own copies of Election Returns (ERs) to prove their allegations that there was manipulation in the canvassing of senatorial candidates.

In an interview, Cesar Flores, president of Smartmatic for Asia-Pacific, said,”It is very easy to prove that there is manipulation on our side, which is completely and utterly false.”

“Again, if anyone, not only UNA, believes the information on the Comelec website has any difference from the information or the results printed on the ER, all they have to do is to bring their copy of the ER,” Flores said in reaction to an UNA statement alleging possible data manipulation by Smartmatic personnel.

He said that the transparency server used by Parish Pastoral Council for Responsible Voting (PPCRV) for its quick count will only contain the ER copy per precinct as transmitted by the PCOS machines which were supplied by Smartmatic.

“If UNA believes that there were manipulations, all they have to do is to bring their own copy of the ER, and show that it is different from whatever is published in the website or in the PPCRV,” he added.

Each PCOS machine generates 30 copies of ERs, one for UNA, or about 2.3 million copies of ERs printed from more than 78,000 voting machines.

“If any party, again, believes there was manipulation in the server, all they have to do is to bring forward their copy of the ERs, and show that it is different, very simple to prove,” he further said.

Also, Flores denied that there was a request from PPCRV for a system audit on the results aired by the citizen’s arm.

“We haven’t received any audit request,¡± he said, asking the question: But how do you audit an automated system?”

“How do you audit the canvass? You have the copy of the ER, and you have that information on the server. If you believe (there was manipulation) even in one single precinct, all you have to do is bring your copy.”

Flores added that the PPCRV showed precinct by precinct results, which can also be reviewed by the National Board of Canvassers (NBoC).

“That’s why the automated system is one hundred percent auditable,” he concluded.(MNS)

COMELEC eyes revamp of poll officials before end of 2015

Revilla, Cambe, Napoles given 10 days to comment on bid to transfer detention