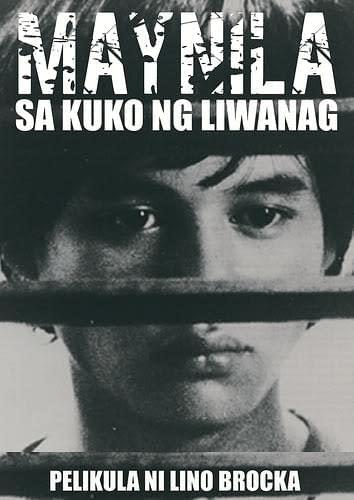 Three award-winning movies of the late filmmaker Lino Brocka and five films featuring superstar Nora Aunor were cited by activists in their list of the 10 best Filipino films of all time, with the much-heralded opus Maynila Sa Mga Kuko ng Liwanag (1976) emerging as the top choice.

Three award-winning movies of the late filmmaker Lino Brocka and five films featuring superstar Nora Aunor were cited by activists in their list of the 10 best Filipino films of all time, with the much-heralded opus “Maynila Sa Mga Kuko ng Liwanag” (1976) emerging as the top choice.

The survey was conducted from Oct.1-21. A total of 37 activists representing peopleâ€™s organizations and non-government groups were asked to name their 10 best films in random order; 29 of them replied.

“Maynila”, written by award-winning novelist Edgardo Reyes, was a general indictment of a decaying urban life under the death bed of martial law, says Raymond Palatino, chair of the National Union of Students of the Philippines, who admits being a lover of foreign and local art films.

Says 43-year old critic Bert Santos, now a staff of the militant fisherfolk group Pamalakaya, “Maynila was dark and gory, sad and disturbing, but it was really beautiful. I saw it 26 years ago but the vivid pictures of life and struggle in Manila shown in that film is amazingly true at this point of our history.”

A student leader of a peasant-youth group also says he saw the Brocka film twice in cable channel Cinema One and was astounded by the sad plight of lovers Julio Madiaga and Ligaya Paraiso who were exploited by other peopleâ€™s greed for lust, corporate exploitation and the moribund social system.

The film garnered 24 votes among the list of over 80 films cited by activists as their best local films of all time, besting Brockaâ€™s other works like “Orapronobis”, “Tinimbang Ka Ngunit Kulang”, including the Nora Aunor classic “Himala” penned by award-winning scriptwriter Ricky Lee and directed by the late National Artist, Ishmael Bernal.

It was not surprising that another Brocka film, “Orapronobis”, came a close second to “Maynila”, having been popular among activists from the late â€˜80s up to the present. It was considered an “eye-opener film” among the present crop of activists, including the pre- and post-Edsa 1 and Edsa 2 activists because of the filmâ€™s capacity to politically agitate its viewers.

Produced during the Aquino administration, the film was banned for commercial exhibition because of its anti-militarization theme but was previewed at the UP Film Center. Activist writer Rachel Anne Calabia, a high school junior then, recalled the scene where one character is being tortured while “No Where” by Diana Ross and the Supremes plays on the background.

“Orapronobis” was cited 22 times – including international awards – and was often referred by activists as the most agitating film in the â€˜80s.

Bernal at his best

Bernal will be remembered by his contemporaries and succeeding generations of activists as one “serious and deep director” for his critique of society and the artistic and political polemics on religion as a tool for class rule and exploitation by the elite. These themes are stressed in a number of his films, including Wating, the last film he directed before he died some years back.

Bernal was remembered for his films like “Nunal Sa Tubig”, “Manila By Night”, “Pagdating sa Dulo” and “Ikaw Ay Akin”, but his most cherished film was Nora Aunorâ€™s classic “Himala” produced in 1982 by the Experimental Cinema of the Philippines.

“Himala”, the most honored entry in the Metro Manila Film Festival (MFFF) in 1982, had Aunor as Elsa, the barrio lass who claimed she saw the Virgin Mary in the village of Cupang and became the toast of the town for her unexplained ability to heal sick people.

“I like how it dissected the evils of religious feudal beliefs in the country. Magaling talaga si Nora Aunor,” says Calabia.

Another activist from Bagong Alyansang Makabayan says “Himala” was among her best local films because of its brave stand on religion and how the ruling class used it as political tool to maintain the status quo and exact class rule. “Definitely itâ€™s Bernalâ€™s most provocative film since Nunal sa Tubig and it was La Aunorâ€™s best performance in her entire career as a film actress,” she says.

“Himala”, a regular feature in several international film festivals abroad and often served as the opening or closing film of the yearly Pelikula at Lipunan festival, was adjudged by activists as the third best film of all time, with 19 votes from 29 respondents. 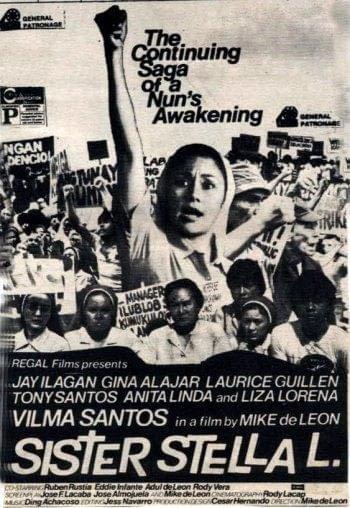 Filipino activists gave justice to slain labor leader Ka Dencio (played by the late Tony Santos Sr.), one of the main characters in the movie “Sister Stella L” produced by Regal Films and directed by Mike de Leon. It was the fourth best film among our activist respondents, citing Lily Monteverdeâ€™s film 13 times.

The film about an activist nun played by Vilma Santos was shown in 1984, two years before the first Edsa uprising. It was inspired by the peopleâ€™s fight against the US-backed Marcos dictatorship with the labor front as its political backdrop in denouncing the fascist rule.

Amy Dural of the Promotion of Church for Peopleâ€™s Response (PCPR) says Sister Stella L should be cited for its clear depiction of the struggle of workers against the exploiting capitalist class and the Church peoplesâ€™ involvement in this fight for class emancipation.

“I gave this film a two-thumbs up for its courageous stand on the issue of labor, state fascism and its rallying call for Church people to absorb the workersâ€™ fight for a just and humane society in flesh and in spirit,” says Dural.

Brockaâ€™s “Tinimbang Ka Ngunit Kulang” tied with Sister Stella L in the fourth spot. “If Ka Dencio was given justice, the same was done to Kuala played superbly by seasoned actress Lolita Rodriguez who was abandoned by a rich playboy acted by Eddie Garcia,” says a former UP student and now staff of the peasant group Kilusang Magbubukid ng Pilipinas (KMP). 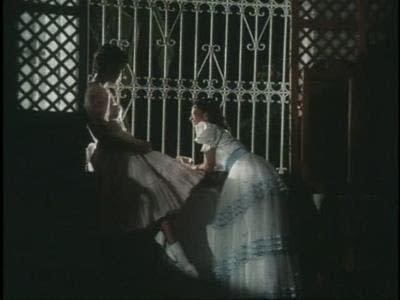 Two anti-colonial films cited 12 times by respondents were tied at No.5, namely the anti-bases Minsan May Isang Gamu-Gamo and the Japanese war time drama Oro Plata Mata produced by Premiere Productions in 1976 and the Experimental Cinema of the Philippines in early â€˜80s respectively.

UP-Manila student Christopher Reginald Vallejos says he had seen the movie twice on ABS-CBN 2 cable channel. Viewing Aunorâ€™s film, he says, is always a delight for staunch anti-bases activist like him.

“The anti-bases film managed to escape the scissors of the Board of Censors that time under the military regime of ex-President Marcos. It is good this film is still preserved and currently used as reference for anti-bases discussions in schools and communities. The film is also a good material for our campaign against the US war of aggression and basing rights in the Philippines,” the student leader says.

Minsan May Isang Gamu-Gamo, one of the gems in the so-called Golden Age of Philippine Cinema (the mid-â€˜70s), won the Famas Best Picture in 1977. It starred Nora Aunor as a Filipina nurse who dreamt of working in the United States but later canceled her trip in the land of milk and honey after her brother played by Aunor’s younger brother in real life Eddie Villamayor was shot by an American serviceman who mistook him for a wild boar.

The classic punchline, “My brother is not a pig!” became one of the best-remembered film dialogues in local cinema.

“Oro, Plata, Mata”, one of the early directorial jobs of Peque Gallaga, won the Gawad Urianâ€™s Best Picture trophy in 1984. According to one respondent, the film was a great portrayal of the angst of a big landlord family during the Japanese colonial occupation of the Philippines and World War II.

Gallaga used graphic sex and violence in depicting the reactionary and fragile nature of the rich and privileged people even in times of war and national distress, according to activist critics.

Respondents cited “Flor Contemplacion” for pinpointing the Ramos government and its labor export policy as the culprit behind the death of the ill-fated Filipina domestic helper in Singapore, while “Bakit May Kahapon Pa?” earned favorable reviews for its anti-militarization stand that challenged ex-President Ramosâ€™ Philippine 2000.

Oâ€™Hara’s “Tatlong Taong Walang Diyos”, a period film about the Japanese occupation of the Philippines, was noticed by activist critics for its anti-colonial and anti-imperialist war message. The three La Aunor films were cited 9 times in the survey.

The film Jose Rizal directed by Marilou Diaz Abaya and starred in by Cesar Montano was the local activists’ 7th best local film (8 votes), followed by another Rizal movie Bayaning Third World and Raymond Redâ€™s Sakay in 8th and 9th places (7 and 6 votes each), respectively.

Abaya’s collaboration with Montano was cited for its cinematography and production design, while Mike de Leonâ€™s Bayaning “Third World” got raves for deconstructing Rizal – in a candid, tongue-and-cheek manner – as a national hero.Â  Redâ€™s long- haired Sakay was cited for its anti-US stand during the American occupation of the Philippines.

Bayaning’s “Third World” was funny, intelligent with Filipino petty bourgeoisie humor, says one of the respondents.

Brocka and his contemporary, Bernal, died a few years ago. Founding members of the Concerned Artists of the Philippines (CAP), both were active in the anti-dictatorship years. Cervantes still directs plays and supports Bayan Muna. The rest of the directors acclaimed in the activistsâ€™ list are still active in the film industry where they reap more awards.