Business as usual for Grace Poe on Tuesday 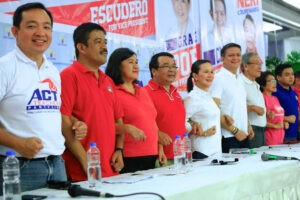 Representatives of the Makabayan bloc led by Rep. Neri Colmenares link arms with Sen. Grace Poe and Sen. Chiz Escudero during a solidarity event at the Quezon City Sports Club on Thursday. The group declared support for Team Galing at Puso in the 2016 election.(MNS photo)

MANILA (Mabuhay) – It’s business as usual for Senator Grace Poe, who is set to visit the province of Laguna on Tuesday, the same day the Senate Electoral Tribunal (SET) is scheduled to decide on the disqualification case filed against her over her citizenship.

Based on the media advisory sent to reporters this Monday, Poe’s team will have consultations with various sectors in Calamba, Laguna, on Tuesday morning and another consultation with students of the Perpetual Help University in Biñan, Laguna, in the afternoon.

There will also be a press conference scheduled at 11 a.m.

While Poe is visiting the province, the 9-member SET will decide on the case filed against her.

The senator earlier said that while she is nervous and sad on how the tribunal would decide on her case, this would not stop her from doing what she has to do for the people.

(What I am thinking right now is if I’d be given the chance, how am I going to help my countrymen? That’s where I am focused right now because if I’m going to mind all the politics involved in the attempt to remove me, prevent me from running, unseat me in the Senate, the kind of service I’m going to do will be affected and that shouldn’t happen.) (MNS)

Stay fresh throughout your day

Aquino to turnover Bangsamoro bill to Congress on Wednesday