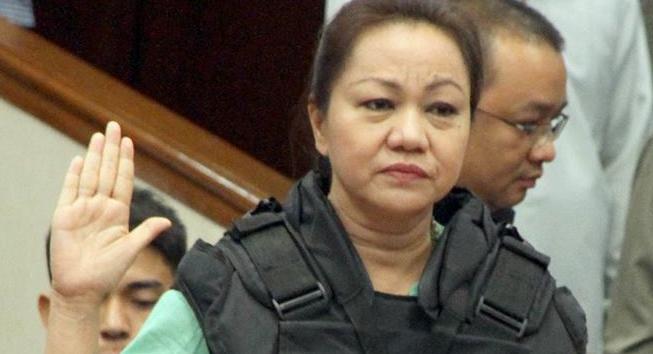 The Philippine National Police on Thursday, August 29, released the mug shots of Janet Lim-Napoles at Camp Crame following her surrender to President Aquino on Wednesday night, August 28. Napoles’s surrender came hours after the President offered a P10M reward to anyone who could give information that will lead to her arrest. (MNS)

MANILA (Mabuhay) – Alleged pork barrel fund scam mastermind Janet Lim-Napoles has failed to secure a Court of Appeals order that would have allowed her to post bail in the serious illegal detention case she is facing.

This was after the appeals court did not issue the temporary restraining order Napoles was asking and instead directed the Makati court to file a comment on the embattled businesswoman’s petition for certiorari.

Napoles filed last April her certiorari plea with a TRO request to contest an earlier order from Makati Judge Elmo Alameda denying for lack of merit her bid to be allowed to post bail in the illegal detention case.

Napoles was slapped with the case for allegedly illegally detaining her former employer at JLN Corp. and now principal pork barrel fund scam whistleblower Benhur Luy from December 2012 to March 2013, when NBI agents were finally able to “rescue” him.

“Without necessarily giving due course to the petition, respondents are hereby directed to file a comment to the said petition within 10 days from notice,” said the CA in a resolution dated May 14, 2014 but obtained by the media on Monday.

The CA also said that the Napoles camp may file a reply within five days from receipt of the respondent’s comment.

The CA also instructed the parties to inform the court of “any pending or subsequently filed (case) involving the same parties and issues, as in the instant petition within five days from learning of the same.”

Napoles allegedly detained Luy for two to three months starting December 2012 after she found out that he secured a P5.5-million loan using her name and without any authorization. She also accused Luy of stealing P300,000 that he was supposed to deposit into her account.

Luy’s camp claimed he was detained to prevent him from spilling the beans on Napoles’ anomalous transactions. These consisted of allegedly diverting P10 billion from lawmakers’ Priority Development Assistance Fund (PDAF) through her non-existent foundations and alleged ghost projects.

Napoles and her brother Reynald Lim were ordered arrested last August 14 over the illegal detention case. The two went into hiding, but Napoles surrendered to President Benigno Aquino III after it was announced that a P10-million reward is being offered for her arrest.

Napoles is now detained at Fort Sto. Domingo in Sta. Rosa, Laguna while Lim remains at large. She is also facing a plunder complaint in connection with the pork barrel scam. (MNS)