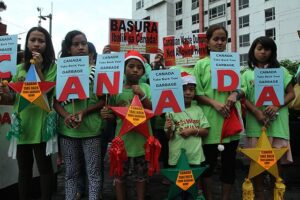 Members of various environmental groups band together to call on Canada to take back its waste in a gathering in Quezon City on Friday. The groups decried shipments of garbage from Canada that have been languishing at a Philippine port for more than a year now. (MNS photo)

MANILA (Mabuhay) – Foreign Affairs Secretary Albert del Rosario on Thursday said the importation of Canadian waste to the Philippines was a violation of the Basel Convention, and that the Department of Foreign Affairs (DFA) is now having bilateral consultations with the Canadian government on how to address the issue.

Del Rosario made the statement when asked about the issue during the Senate hearing on the P20.56 billion proposed 2016 budget of the DFA.

“First, the trash is neither toxic or hazardous; second, it is a violation of domestic law, two cases have already been filed against the importer, and it is a violation of the Basel Convention,” he said, adding that he has conveyed the violation formally to Canada including a first person note and a phone call on its foreign minister.

He said the DFA has consulted the Basel Secretariat regarding the issue and it advised the two parties to seek a resolution in a bilateral level.

“We continue to have bilateral consultations with the Canadian government to find a solution. We just want to point out that the Basel Convention urges parties to seek bilateral resolution as a primary approach,” Del Rosario said.

The Basel Convention, in which both Canada and the Philippines are signatories, states that in the case of an illegal movement of hazardous or other waste, the State of export shall ensure that the waste in question are:

(a) taken back by the exporter or the generator or, if necessary, by itself into the State of export, or, if impracticable,

(b) are otherwise disposed of in accordance with the provisions of this Convention, within 30 days from the time the State of export has been informed about the illegal traffic or such other period of time as States concerned may agree. To this end the Parties concerned shall not oppose, hinder or prevent the return of those wastes to the State of export.

Del Rosario, during the hearing, told the Finance Committee under Senator Loren Legarda that the interagency meeting held on October 1 affirmed the decision to continue to engage Canada for a bilateral solution and to monitor the ongoing cases.

The agencies that led the meeting were the Department of Environment and Natural Resources, Bureau of Customs, and Department of Justice.

“It actually elates me that the DFA has clarified the issue that indeed it violates the domestic law and Basel Convention,” she said. “That makes it very clear that Canada should take back its waste.”

She also lauded Del Rosatio for being pro-active on the issue and for calling the Canadian foreign minister instead of just letting the inter-agency solve the matter by itself.

“I truly hope that the bilateral solution to this issue will be resolved soon. In the meantime, the waste is just there in our port, part of it is in a landfill in Clark but still it is an unresolved issue.

It is very important that the DFA has taken the position that indeed the presence of this waste here violates the Basel Convention and domestic laws,” she said during the hearing.

Senators earlier called on the government to reverse its decision to allow the disposal of the Canadian waste, which arrived in June 2013, in the country.

The earlier position of DENR was to force Canada to re-import the waste, but an inter-agency committee composed of the DENR, DFA, the Department of Justice and the Bureau of Customs, in a decision in August 2014, agreed to let the disposal of the waste in the country.(MNS)

3 ways to contain the ugly holiday shopper within

Nothing to worry about, Palace says following bubonic plague case in China