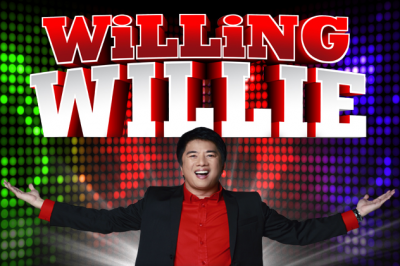 MANILA, April 14, 2011 (AFP) – Fast-talking comedian Willy Revillame is one of the most popular television personalities in the Philippines with a legion of poor fans who crave the thick wads of cash he hands out to audience members.

But to many critics, the 50-year-old star represents all that is wrong with an industry that they say has for years promoted low-brow entertainment and toilet humor.

Producers at TV5 television yanked Revillame’s “Willing Willie” show off the air this week amid an uproar over a segment involving a crying six-year-old boy the host cajoled into simulating a striptease for the equivalent of $230.

The incident in March has sparked a heated debate over the standards of Philippine television, with some calling for an end to shows they say prey on the poor and debase moral values in the conservative Catholic nation.

He said Revillame was a creation of an industry that had lost its moral compass as networks fought an intense ratings war.

In Revillame’s show, studio audiences get the chance to win cash, cars, houses and other prizes by dancing and doing other acts on stage, but also by having to recount their problems with poverty and other hardships.

With a third of the country’s 94 million population living on a dollar or less a day, Revillame’s prizes appear as golden tickets to a better life while his show offers TV viewers a temporary escape from their hardships.

Highlighting the desperation of the poor, 78 fans were killed in a stampede in 2006 as they lined up to join Revillame’s previous show on another network.

Zulueta and other critics said Revillame was not the sole purveyor of bad taste, pointing to other reality shows that promote greed and open hostility among contestants.

Meanwhile, scantily clad women who gyrate on stage and flirt with game show hosts are common fare on prime-time TV, while senseless plots in soap operas copied mostly from South Korean and Mexican “telenovelas” are a dime a dozen.

Daytime comedy shows accessible to children also use language heavy in sexual innuendo, in a country where sex education in schools remains controversial.

A soap opera that recently completed its run on one network was patterned after a 1980s-era soft-porn movie about a 14-year-old girl in a sexual adventure with two men, leading to unwanted pregnancy.

Another talk show currently on air allows housewives and mistresses, and warring neighbours to confront each other, often leading to verbal abuse and punch-ups, hair-pulling and other angry encounters on live television.

Content of this kind may be considered common in the West, but is much more controversial in the Philippines where about 80 percent of the population are Catholic and the church remains a powerful moral force.

Divorce and abortion remain illegal in the Philippines, and conservative lawmakers have repeatedly rejected bills that would promote artificial contraceptives.

In an emotionally charged appeal this week on her blog, theatre actress Monique Wilson called on her fellow artists to help raise television standards and boycott exploitative, low-brow shows.

Wilson, who counts among her achievements the lead role in the West End production of the Miss Saigon musical in the early 1990s, said television was supposed to empower and educate.

“When you see shows like Willing Willie — and many other similar shows — they do the opposite,” she said.

“They dumb down audiences. They disempower them by creating a mendicant society with game shows that promise quick money. They keep them dependent on handouts, instead of creating opportunities for them to build on skills.”

Veteran TV programmer Nessa Valdellon joined the chorus of calls in the mainstream press this week for advertisers to invest on shows that provoke critical thinking.

“It’s not just a pipe dream. I believe the Pinoy (Filipino) audience is a thinking audience,” Valdellon told AFP.

Nevertheless, many critics believe Revillame will soon be back on the air, with his show currently only being suspended for two weeks and the host defiant about his style of entertainment.

“The program aims to provide a venue for everyone to show their talents, tell their stories and make their dreams come true,” he said in a joint statement with his employers.

Gutierrez family to star in their own reality show

Jodi Sta. Maria opens up about own ‘broken marriage vow’

How is Vice Ganda’s finances after ABS-CBN shutdown, amid pandemic?