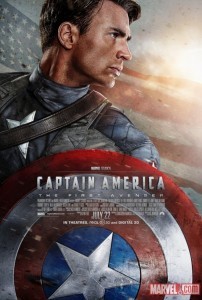 LOS ANGELES, July 21, 2011 (AFP) – The latest comic book superhero to hit the silver screen may be called Captain America, but the film’s makers insist he is not intended to be all-American, beyond the name.

In the movie the Captain — who joins fellow Marvel comic characters Spiderman, Iron Man, Hulk and Thor in the transfer to film — is revealed as the secret weapon against the Nazis in World War II.

“You can take this character, and what he does and how he thinks and what he believes in and translate it in any culture, any nationality, any period. And the story should work. The most American thing in the movie is the title.”

The movie tells the story of Steve Rogers, a skinny kid whose dreams of joining the army are rebuffed, but who is selected for a top secret process which transforms him into a muscle-bound hero with the body of a Greek god.

In his Stars and Stripe colored uniform and trusty shield, he is sent in to spearhead the anti-Nazi fight against the megalomaniac plans of the sinister baddie Johann Schmidt.

Marvel initially wanted Captain America to be brought into the present, but Johnston insisted on going back to the roots, and setting the story in the 1940s, when the world was at war.

“I said to them — and they agreed — You have one chance to tell the original story of Captain America. I know there was a great story in the origin of the character,” he said.

“We wanted to create our own universe. It’s basically good versus evil. It’s really a guy who wants to do the right thing. It’s about his determination. I’m not making a propaganda movie,” he added.

And he was keen to give the movie a 1940s feel and to reduce it to a simple story, to set it apart from other superhero movies packed with special effects and multiple characters.

Part of the feel came from the camerawork. “To create the atmosphere I wanted to show that an action adventure film could take place in the 40s. It’s very unusual.

“I wanted to have the film feel of the 40s, without feeling that it was made in the 40s. What we did do was shoot the film on very, very wide lenses, the ones used in the 40s. It opens the film up. You see everything.”

Chris Evans, the actor who plays Captain America, agrees that his character should not be seen from a patriotic point of view.

The actor, who was Johnny Storm in 2005’s “The Fantastic Four,” said he felt a great responsibility in the role.

“This character that people love and followed. They expect a lot. You’re not creating something new. You’re trying to extend something that already exists, and it’s a double-edged sword,” he told AFP.

“The good thing is you have a built-in audience that already knows the character and is familiar with him, and will come to see the movie. But they are coming with an expectation and you don’t want to disappoint them.”

Luis Manzano stands with Angel Locsin in Lumad cause