Carpio: SET justices to inhibit on DQ case vs Poe in Supreme Court 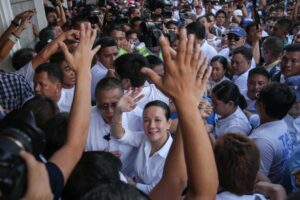 Sen. Grace Poe (bottom center) flanked by supporters during her arrival at the Commission on Election Headquarters to file her Certificate of Candidacy, Thursday. Sen. Poe will be running independently with Sen. Chiz Escudero as her running mate for the 2016 election. (MNS photo)

MANILA (Mbuhay) – Senior Associate Justice Antonio Carpio said he and the two other justices who voted at the Senate Electoral Tribunal (SET) to disqualify Senator Grace Poe as senator will inhibit when the case is brought to the Supreme Court (SC).

The other justices who voted to disqualify Poe were Associate Justices Teresita Leonardo de Castro and Arturo Brion.

Another SET member who voted along the three justices was Senator Nancy Binay.

Asked if the three justices would still participate when the case is elevates before the SC, Carpio said: “No, we have to inhibit because we cannot review our own decision.”

Carpio issued the statement after the SET voted with finality to uphold its earlier decision, voting 5-4, to junk the case against Poe.

Asked if he already expected the final decision of the SET, Carpio said: “[Yes] because I don’t think anybody will change his mind.”

Asked again if he was disappointed, Carpio said: “That’s how it is. That’s a routine because if you’re in the Supreme Court you can always be in the minority.” (MNS)